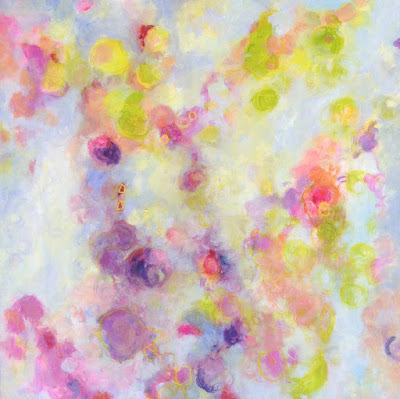 Colour Pop
24" x 24" - acrylic on canvas - $350
After painting numerous landscapes this winter I needed a 'subject' break. I went through my photos of flowers and found one that suggested interesting possibilities for abstraction. It was essentially a garden of multi-coloured flowers. I knew that I did not want to paint the individual blossoms, stems and leaves so tried to suggest something more ethereal with a high key colour palette, circular shapes and a variety of edges, which together produced a good sense of visual rhythm over the canvas surface. I did draw into the paint once it was dry, with a yellow 'inktense' crayon, but the lines are subtle. I enjoyed the break, and will explore and experiment with these ideas again, but not right now! Have a wonderful weekend. 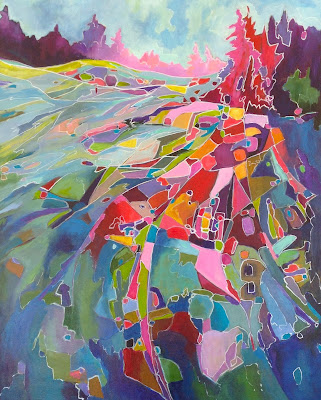 High Waters
30" x 24"  - acrylic on canvas -SOLD
I have been living with this landscape for a few weeks now, and continue to really like it. It evolved in much the same way as my other landscapes: initially inspired by a photo reference, or a combination of visual ideas, and then just more painting, with thinking time between working sessions.
The photos below will give you an idea of that progression. 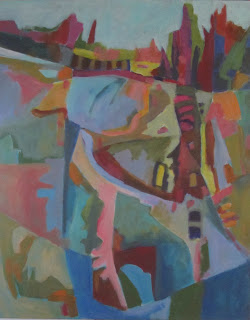 I started with a very high horizon line, and broke down the "space" below into a variety of abstract shapes, essentially thinking it was 'land', but it felt very static and had very little value contrast. 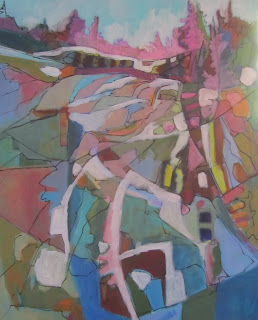 I decided to organize all the small land shapes into more distinct areas, so added some big curving lines that descended down from the right hand trees, and across the picture plane. I also began to experiment with colour and value. 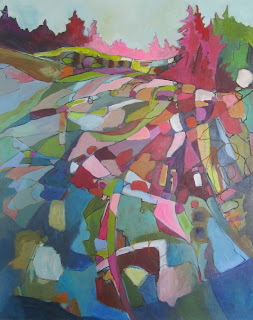 At this stage I really liked the overall patterning and palette, but it needed some pizzazz. I had already drawn into the painting with a dark acrylic marker which disappeared as I painted. To add emphasis, a greater level of abstraction and hopefully pizzazz, I  drew back into the composition with a white acrylic marker, but only in some areas. And once that happened, so did the magic. It moved from being a 'scape of descending hills to a 'scape of waves on water with trees reflections! 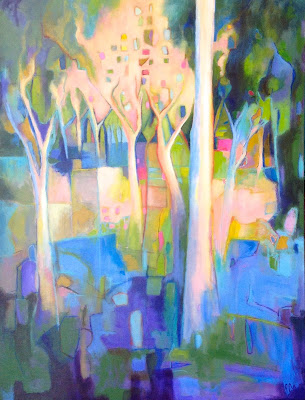 This is another landscape painting I recently finished in which interpretation is more important than representation. It is now on display at the Longboat Key Centre for the Arts (Florida) as part of their annual juried 'Community' Exhibition.

Posted by Patricia MacDonald at 7:00 am 2 comments 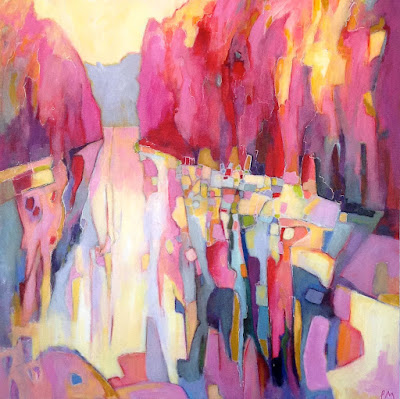 
Since posting Radiant River  a couple of weeks ago I have continued to experiment with ways to abstract and interpret the landscape and use it as a vehicle for exploring the visual language of painting - colour, composition, value, form, movement and the paint itself. I decided to work with that particular landscape subject again, but in a square format and the result is Scorcher. This is how it evolved over a number of days and many long hours. 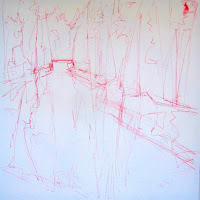 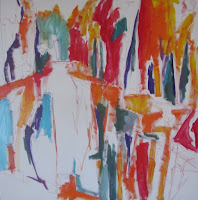 I love drawing on a fresh white (that's right - no ground or underpainting here!) canvas with an inktense crayon - they are soft and smudge as you draw and when you wet the lines with water, they explode and smear and drip. I used a red crayon because I wanted a bold, hot colour scheme and so began with reds, pinks and yellows, applying them in big loose strokes. 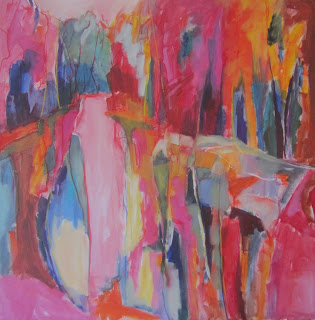 After that came the hard part - refining the palette, working  on values and making decisions about where this painting was going and how I would get it there. Not as much fun. 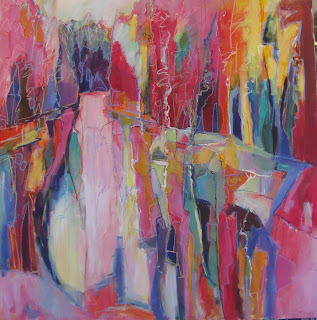 I added surface marks in the form of 'lines', using pastels, inks and acrylic markers. Then more painting. It went from fun and exciting to work and struggle - however -  I am very happy with the final work. Right now I am calling it Scorcher mainly because of the hot pinks and red palette, which reminds me of summer heat waves, and how we used to hear on the radio that "it's going to be a scorcher of a day". Have a good one!