My sister is on a cycling trip in Provence. I am wishing I was there, painting. Maybe next year. Until then my photos will have to suffice as inspiration.
Posted by Patricia MacDonald at 8:06 am 0 comments

This is one of the still life paintings I mentioned the other day - in fact the canvas that I decided to re-work. I am quite happy with the painting now; I really like how loose and painterly much of it is, and how the objects merge with the background. Stay tuned for the last of the three in this little series.

This is the Home page of my new website that I published just today. My previous website was fine, but out of date and too costly for me to have updated. I really wanted to control this aspect myself and this resulted in purchasing a series of video tutorials from Artists Websites that teach you how to create a website on Weebly. The $100 package took you through all the steps with clear instructions and the creator Leah Markham, answered my questions promptly, when I had them. All in all a good experience and I would recommend it. And the best part is I can update the site myself, whenever I want. So check it out.....patriciamacdonaldart.com
Now, I can get back to those still life paintings that are almost done....... 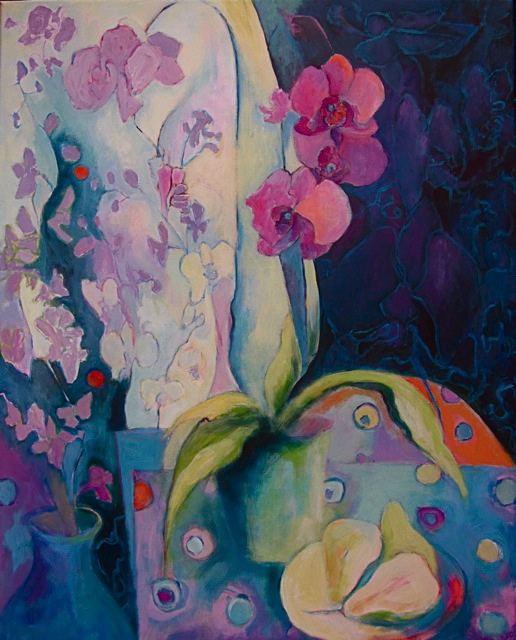 This still life has been on and off my easel since last December. I knew I wanted the orchids to be the focal point, but wasn't sure about the rest of the composition. Ever the optimist, I hoped ideas would emerge along the way, and began to paint. The flowers, table top area and pears were the easy bits and I was pleased with the colour, skewed perspective and the way some edges faded into the background. After some time and much thought, I worked on the left half of the canvas and pushed the idea of emerging and fading orchid shapes. However the right half of the painting was still a problem and it was at that point I put the work aside.

During the winter I started another still life  - with flowers and objects emerging and fading - and liked a lot of it, but again became bogged down, and put it aside.  Then I re-discovered a still life with tulips I did a few years ago, and decided I would experiment with 'edges and fading shapes' in it.

On the weekend I set up all three partially finished paintings and I was struck by the similarities among them. Each informed the other and provided the impetus and direction I needed to continue.

Time has also helped and I continued with the idea of graphic orchid shapes in the right quadrant on this one. I am very pleased with the final painting and the way the imagery emerges and fades back, appears as ghost images, and as visual surprises, within a wonky space. I hope that the viewer is engaged by all of this and if nothing else, enjoys the decorative surface. Now the other two half-finished paintings are staring at me, so it's time to get back to work.

Posted by Patricia MacDonald at 8:44 am 2 comments

Going Down the Road

This painting is all about shape and color - and memories of Provence and the many roads - real and metaphorical - that we all travel through our lives. Have a wonderful weekend!
Posted by Patricia MacDonald at 7:04 am 0 comments

This 'variation on a theme' is a marsh view in the Haliburton area of Ontario (along highway 118), given a spring colour makeover. Spring seems to have finally arrived in this part of the world - the air is fresh, the sun is warm and flowers are blooming. Not sure if the ice is off of our lake just yet - but cottage time is just around the corner. Yeah!
Posted by Patricia MacDonald at 6:56 am 0 comments