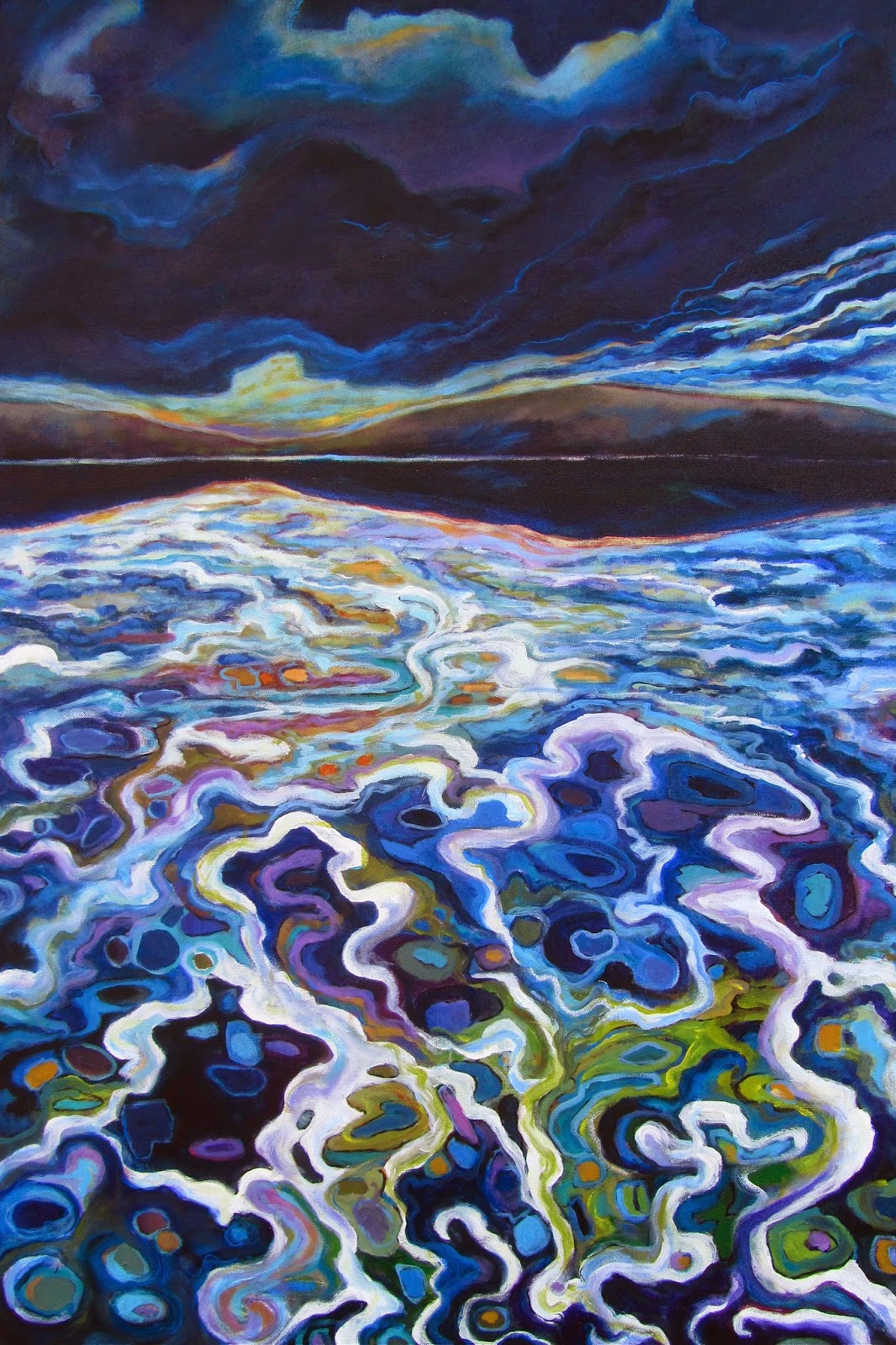 This painting, like so much of my work, is based on a photo. In this case it was one that I took at my cottage one fabulous afternoon in late May, several years ago. The day was unseasonably warm, and the blue blue sky was full of big, fluffy clouds. Their perfect reflection in the calm lake water was amazing, and the stillness made the moment magical. 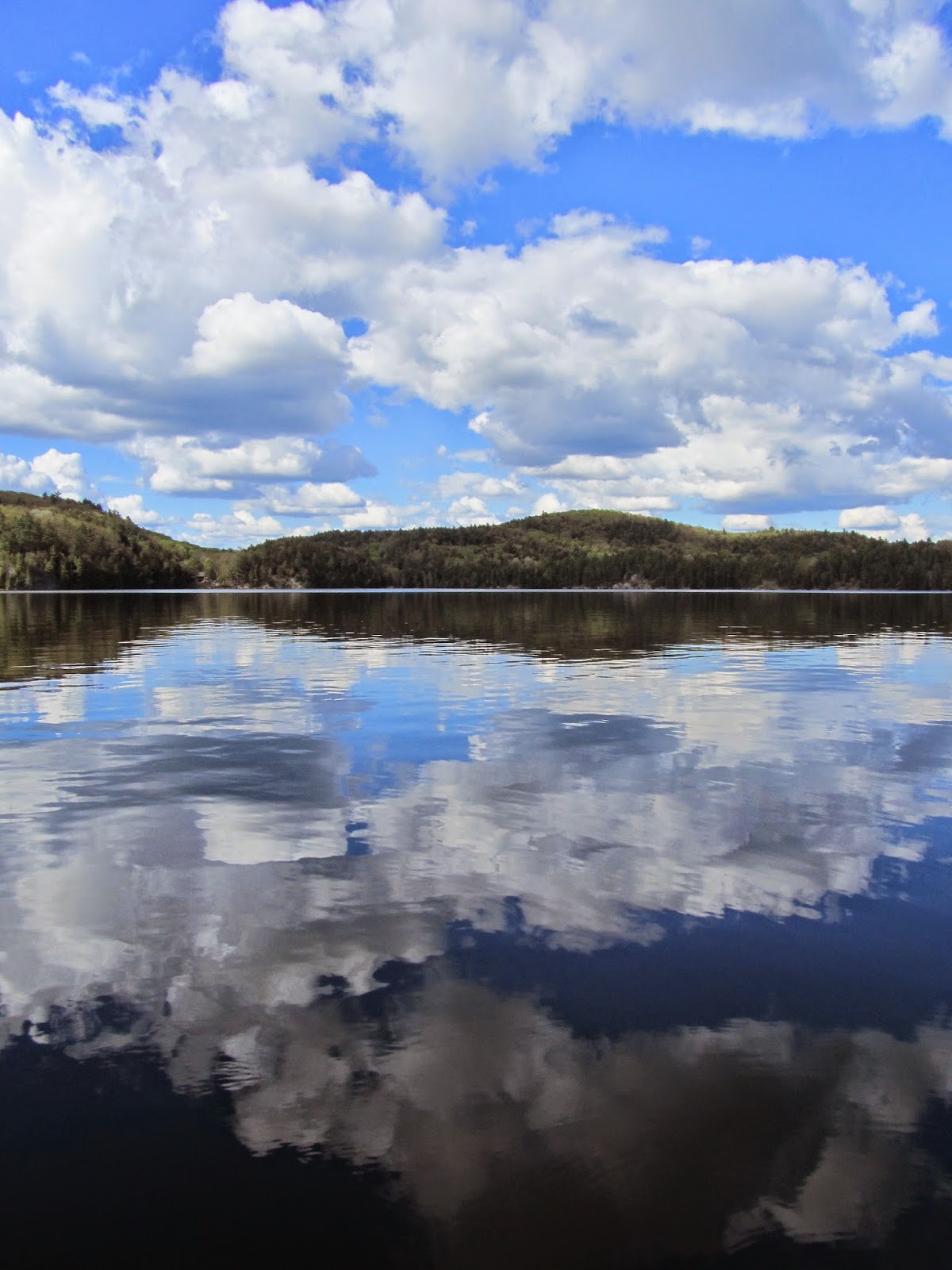 I have tried to paint this scene several times, but, despite loving the memory of the day and place, found the relentless symmetry, ultimately uninteresting. I realized that what I really wanted to paint were the reflections in the water, and continue to explore this subject in an abstracted, stylized way. Boldness and imagination seemed in order.....thus the photo became a point of departure.

I started this 'new' work last spring, envisioning a very different scene from the photo view - with a dramatic night sky and an even more dramatic interpretation of the water and reflections. The latter, as you can see, is highly imagined, and was great fun to paint. However, but it took all summer to figure out what to do with the sky. Originally I had sketched in some simplified clouds, but they just seemed to take up space and look wrong. When I returned to this canvas a few days ago I worked at the clouds for a while but they didn't improve, so then I painted them out and had an aha! moment, realizing that a simpler cloudless sky would work much better (whether it makes sense logically doesn't really matter), and offer a perfect visual counterpoint to the wild water below. And I think it does, quite successfully. 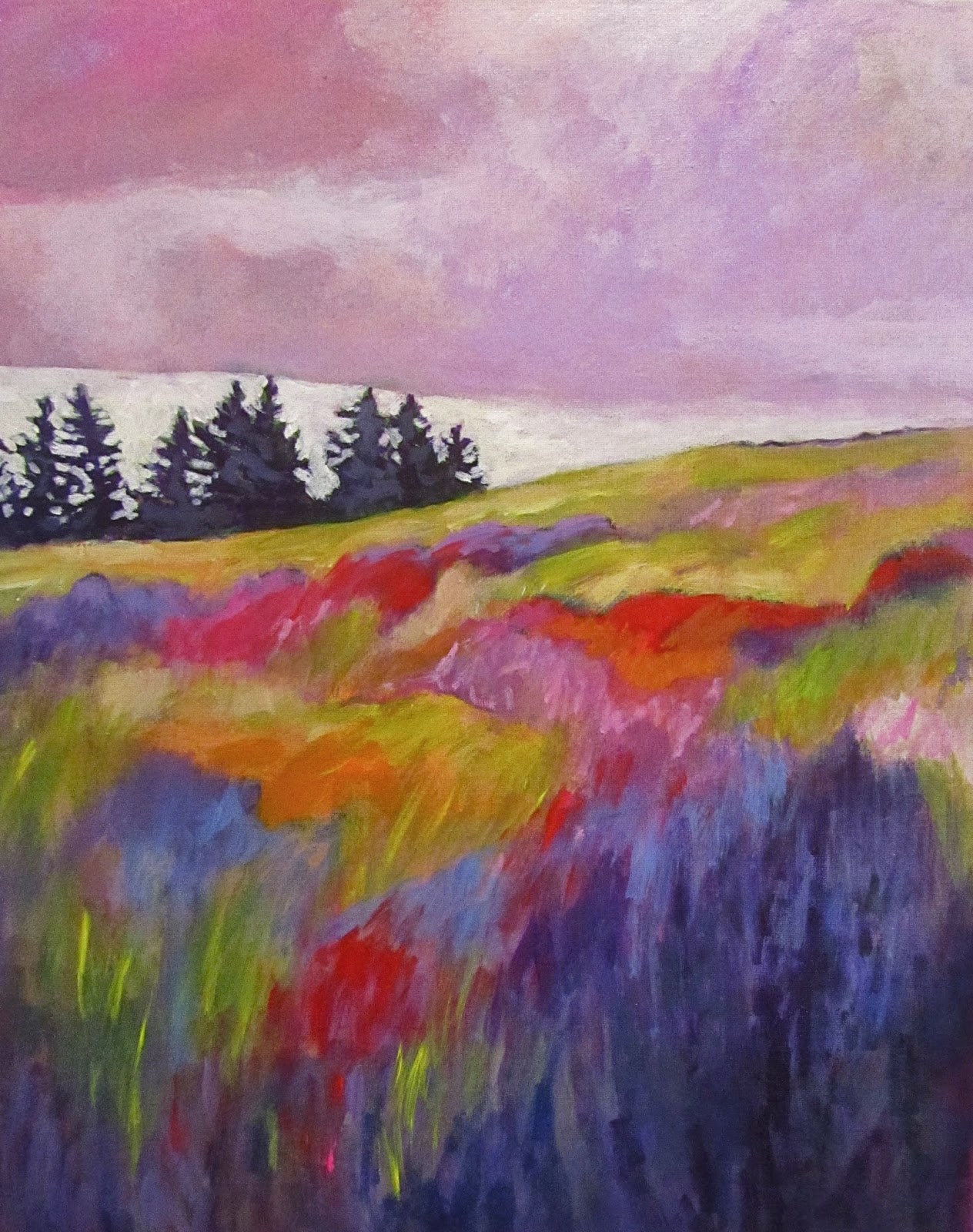 Prince Edward Island Landscape
20" x 16"  acrylic on canvas
This is for sale - contact me for price if interested.

This painting is based on a photo I took during a trip to Prince Edward Island a few years ago with my daughter. I took photos as we drove (well I did stop the car) through the countryside of Canada's smallest province on the east coast, the fictitious  home of Anne of Green Gables, hoping that some might eventually inspire a painting or two. 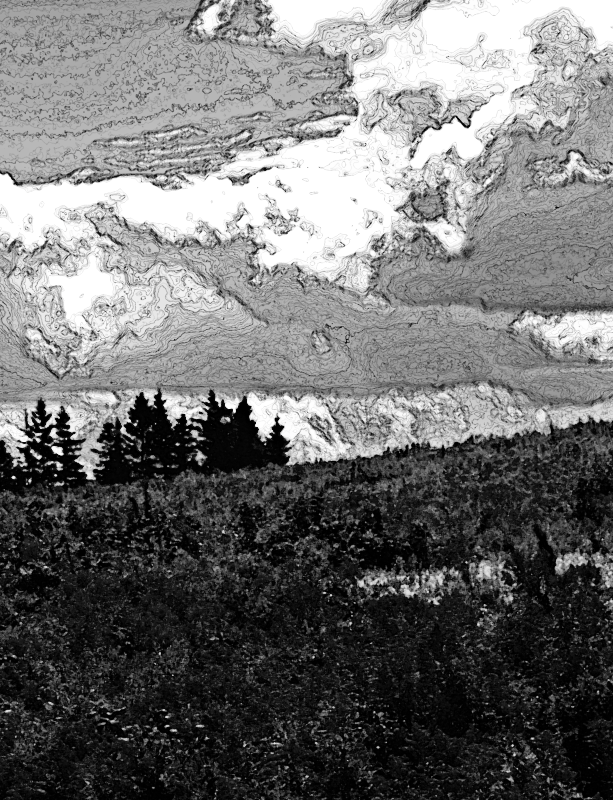 Though the actual colours of the island landscape in August are, in fact, quite vivid,  they did not come across in my photo. But then that is not really my landscape style anyway, preferring to interpret colour and therefore mood. My process began with reducing the photo to a greyscale version and I developed the colour scheme as I painted. 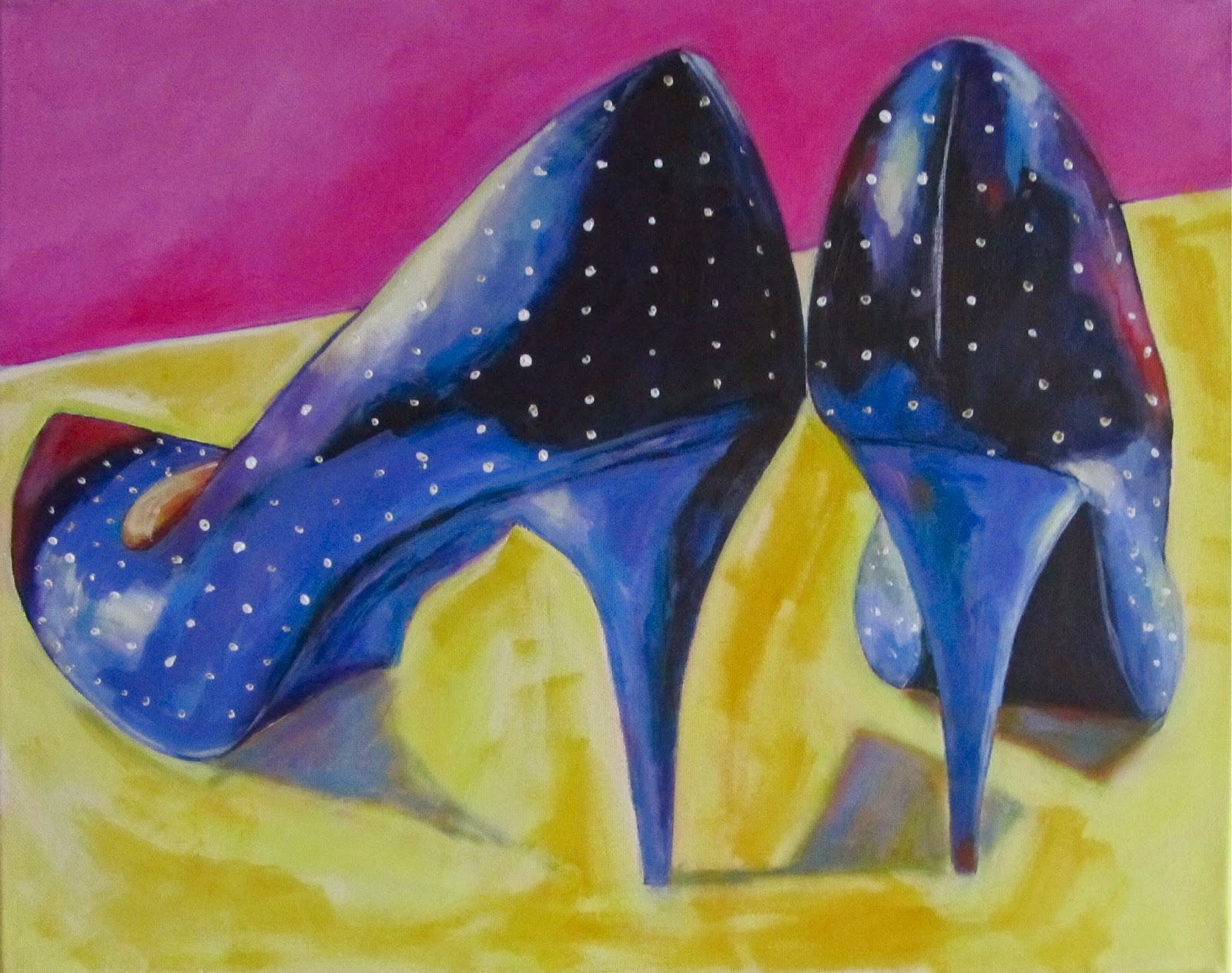 When my 23 year old law student daughter was little she always wanted me to wear shoes like this - but being a sensible-shoe-kind-of-person who preferred comfort and stability over high fashion (at least on one's feet), I generally stayed away from this kind of footwear. These were her first pair of high heels, and I just had to paint them. A fun painting and a nice break from landscape. 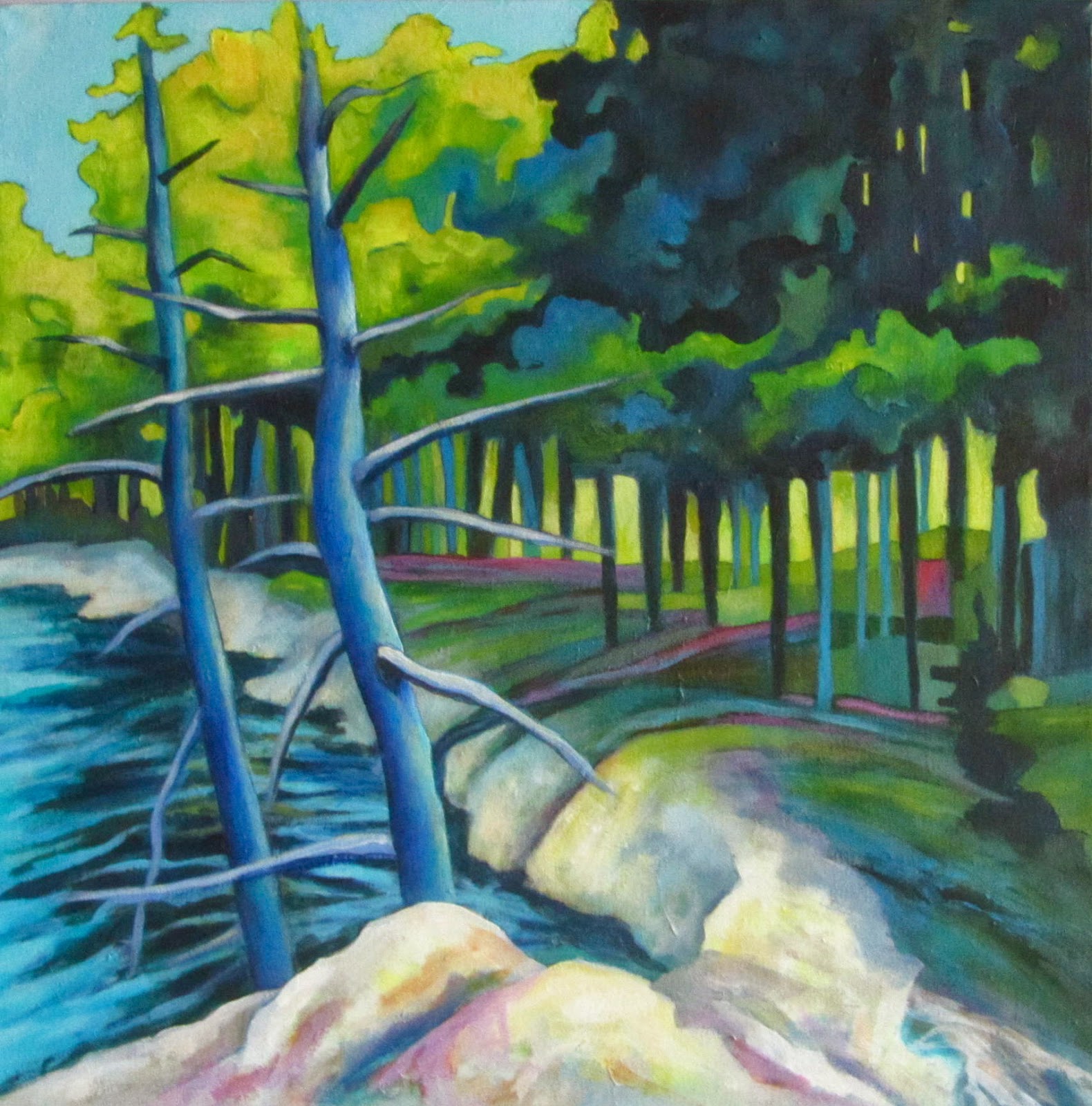 Blue Pines
24" x 24"  acrylic on canvas
This is for sale - contact me for price if interested.
I became fascinated with this view of 'two dead pine trees growing out of some rocks with a lake and a grove of backlit trees' during the summer, after taking some photos of that scene when visiting my good friend Kate at her cottage on Weslemkoon Lake in Ontario. The first version, called Summer Pines (posted in July), was larger, rectangular in format, and more abstract and whimsical in colour - and I have to say that I love it. 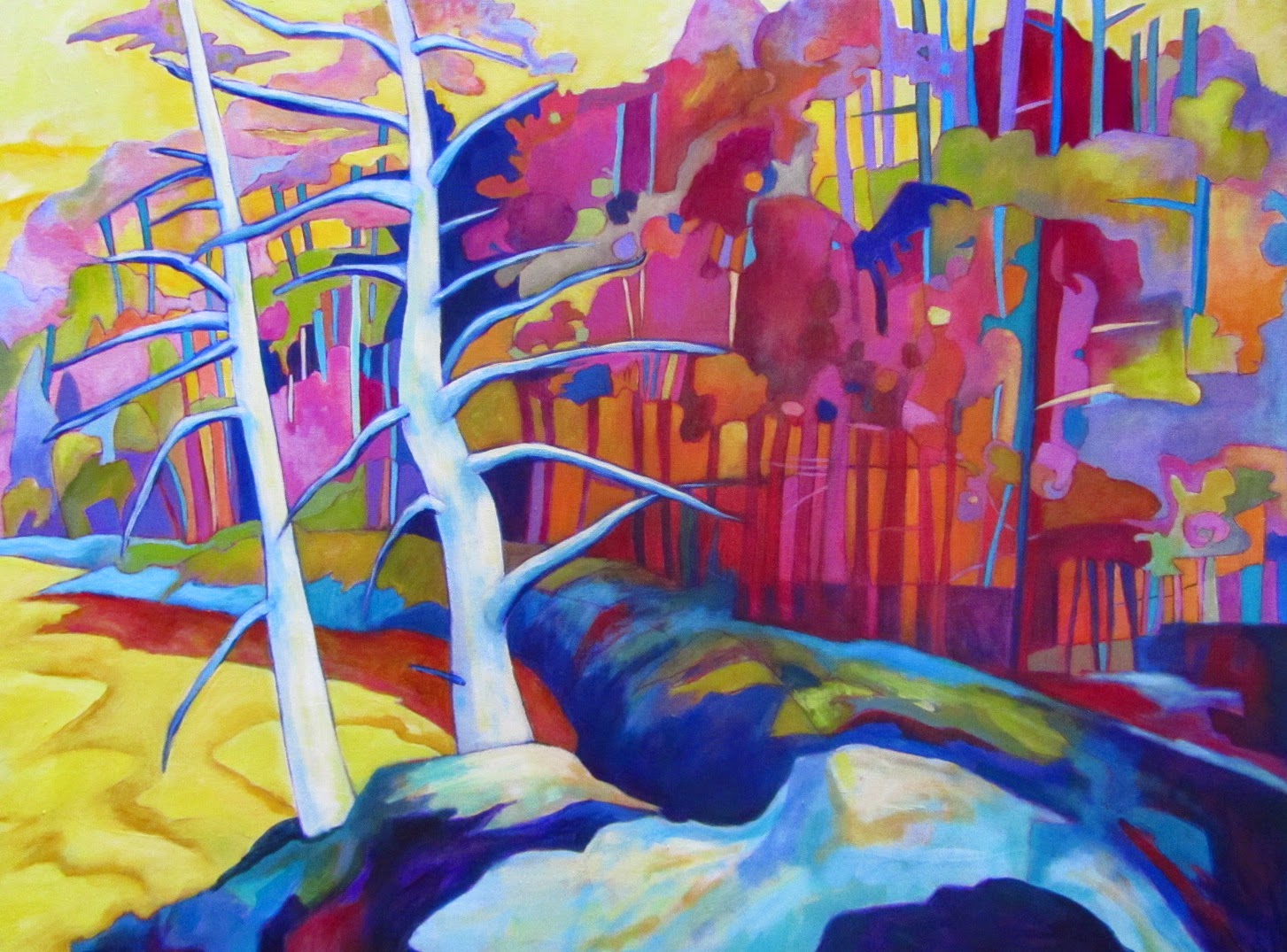 Summer Pines
I started another version soon after and began with the easy changes, to format (square) and palette (analagous: blue, green, yellow). I then started painting the background trees and foliage, and liked how it was evolving and looked - more abstract and painterly. 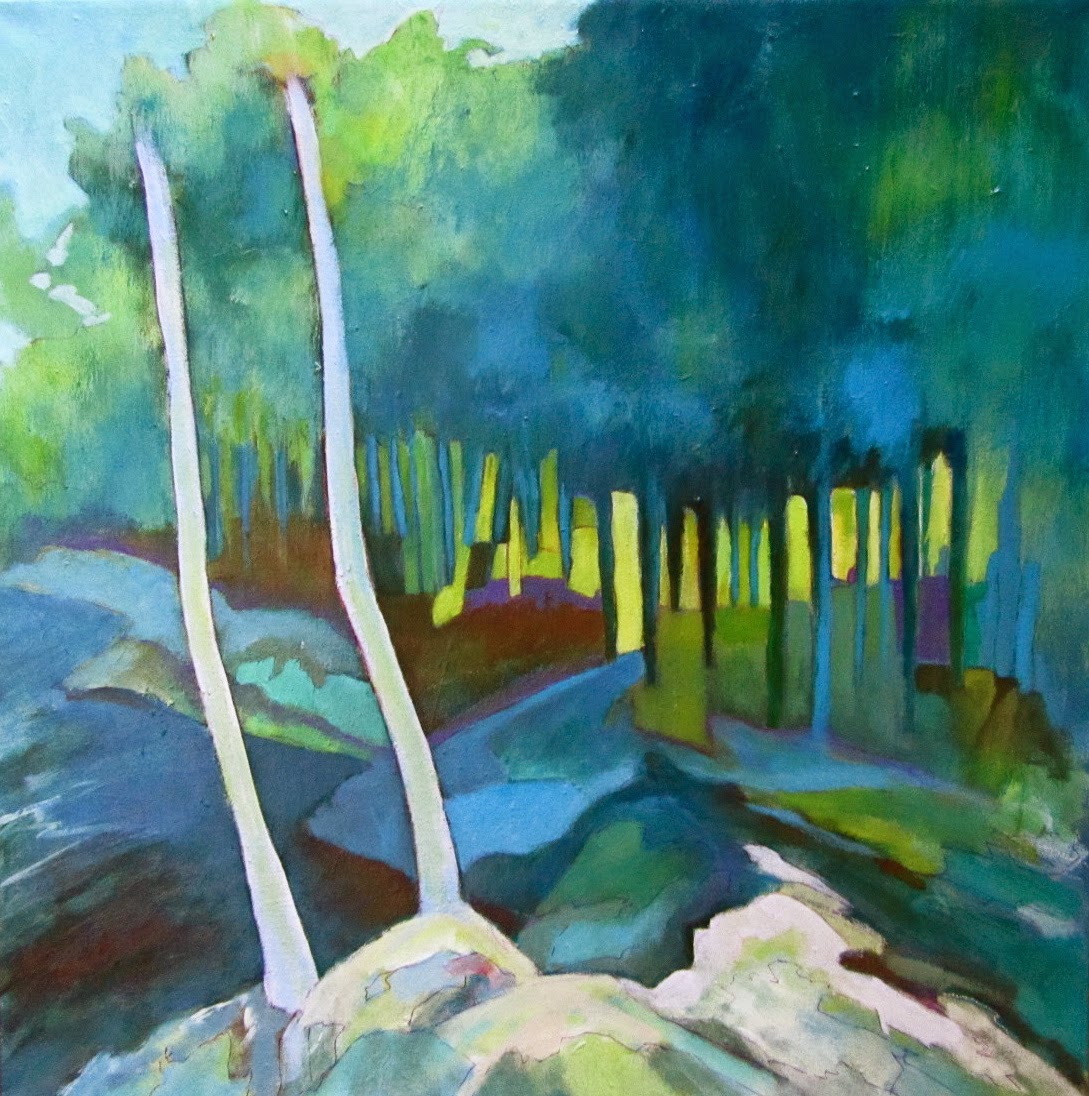 However, the trees, rocks and water were proving a challenge, so I in frustration I decided to leave the painting for a few days (which turned into weeks), hoping that inspiration, or an idea, or a greater willingness to risk something new, would eventually occur. Sometimes that works. Last week my gaze wandered to this canvas stacked against the wall with others, and I realized how to finish it - by making changes to the foliage, and to just keep painting. Which is what I did, thoroughly enjoying the process. And I love it, too.

Another Promenade from Les Bassacs 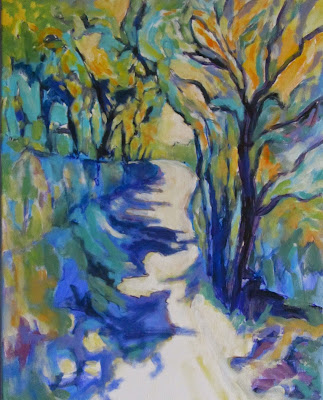 Les Bassacs Promenade II
20" x 16"  acrylic on canvas
This is for sale - contact me for price if interested.

This painting is based on a photo I took at Les Bassacs, on one of my last glorious days there, walking along one of the many paths towards the vineyards. I spent a long time thinking about how I would paint this view, wanting to capture the sense of light and shade, foliage and sky in the scene. I knew that I did not want detail or tight forms, so decided to work quickly and keep my brush loaded with enough paint to produce fluid strokes of colour. I love painting this way and always wonder why I don't work more often like this! 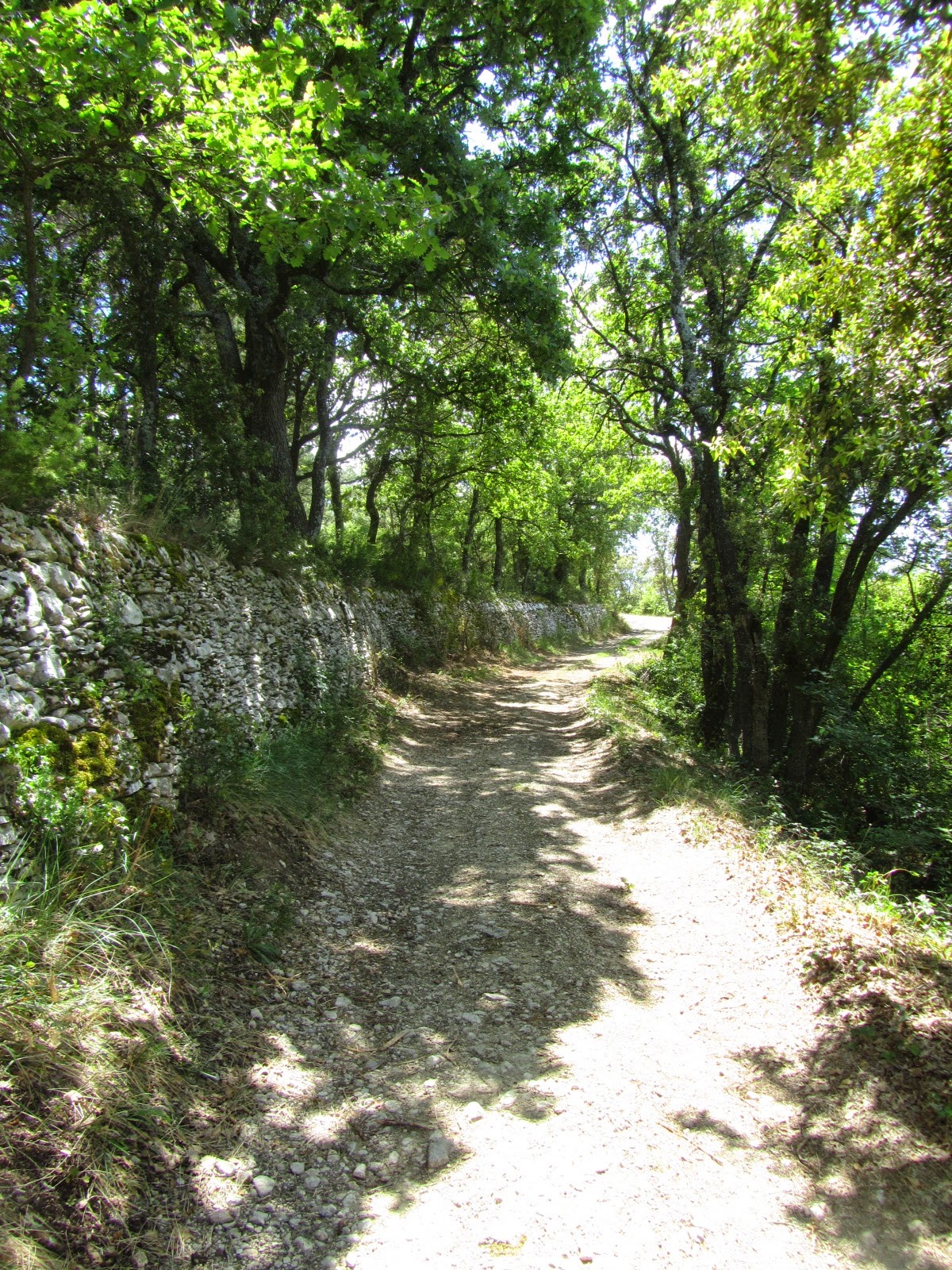 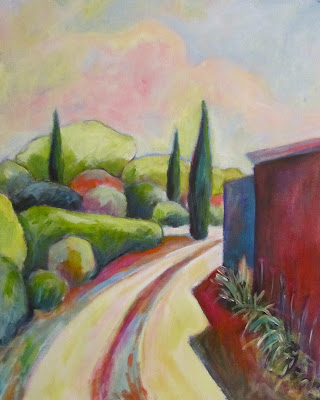 Les Bassacs Promenade I
20" x 16"  acrylic on canvas
This is for sale - contact me for price if interested.

Les Bassacs is the hamlet - really a collection of old stone provencale buildings surrounded by cherry orchards, lavender fields, and vineyards in the Luberon Valley, where I spent a week painting in May. This is one of the views, based on a photo and inspired by memory of the place - peaceful, serene and idyllic.

Posted by Patricia MacDonald at 8:00 am 0 comments