The visual reference for this painting was a photo I took in British Columbia a few years ago. It's a very ordinary view of some trees along a road, shot from the car window. 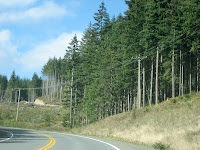 The challenge was to paint something 'atmospheric', using only the basic layout of the landscape elements in the photo. I started by roughing in the shapes of the land, trees and road, painting quickly using a big brush and lots of paint. 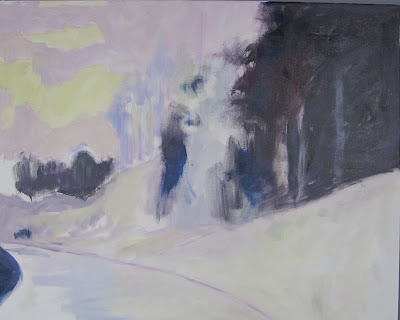 Because I wanted to establish the values at the start, I decided to use only coloured grays, i.e. black and white mixtures, with a little purple, blue, and yellow thrown in to jazz them up. 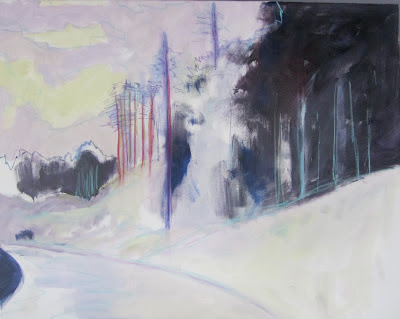 As I was still in the joyful 'play' stage, I added some pastel lines for emphasis. And as often happens,  I really liked what had happened on the canvas in a very short time - particularly the strong, uninhibited graphic quality, sense of spontaneity and palette - but it also did not feel like a finished painting.

I have often experienced this situation and recalled a recent post-letter  (Sept. 4/2012 - 'Flushing the Rolodex') from Robert Genn that was all about great painting starts and why or how they lose their initial energy because of noodling. Robert wrote:

"How many times have we watched our first courageous strokes deteriorate into a cluttered mess that looks like the work of fussy ne'er-do-wells. This happens for several reasons and they're mostly psychological. You can go a long way toward fixing the problem by first lying down on your couch.

You need to know that when you begin you're generally in "big-brush-layout" mode. Feeling yourself in the safe zone of "just starting," your painterly confidence temporarily triumphs over your natural human tendency to refine.

In short order, all of this changes. When you see your start is not bad, a sort of guilt kicks in and tells you it can't be all that easy. This is when you start to compulsively add material, that is, you begin to give too much."

Great advice, as always. I tried to follow it and though the painting changed, I think it evolved appropriately. It now feels finished, and hopefully not overworked. I have to say that I (still) love the composition and the colours - together evoking a very restful and contemplative scene, that does exist, but is also a memory of another time and place.


Posted by Patricia MacDonald at 8:50 am 0 comments

Market Day at Apt in Provence 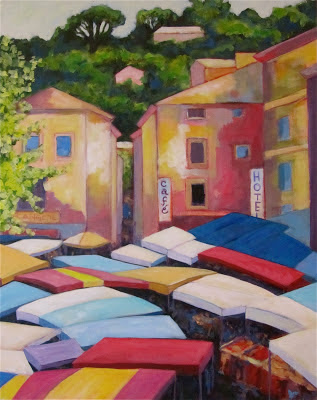 I started this painting last summer just after returning from Provence. If you have ever been to a market in the south of France you will know how wonderful they are. Busy, colourful and full of food, produce and wonderful things. I wanted to buy everything I saw - particularly the food - but restrained myself - and took pictures instead.

Though I made a good start on the painting in July, I reached a point where I had to take some time to think about it. As you can see it's a busy painting composed of many specific shapes, particularly in the lower half of the canvas, and I really wanted it to look right. Drawing the tent shapes from the photo was a challenge, as was painting them. I returned to this on the weekend and finished it today. I am quite pleased with how it turned out. I think the strong colours and repeating tent shapes in the foreground convey a sense of the market activity, while the colous of the building, tree foliage and sky suggest clear summer morning light.

And here are some of my photos from that and other markets I visited on my trip. Enjoy. 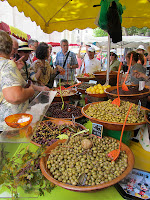 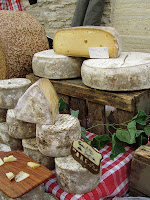 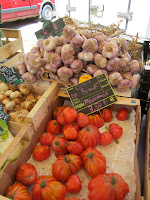 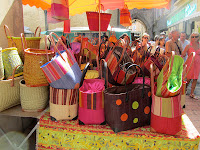 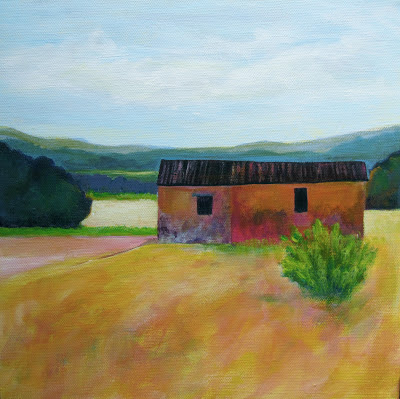 I have three larger paintings on the go - two that I started in the summer and one that I started last week. I need contemplation time before I finish them - but I also need to paint - and this small work was the result. It's based on a photo I took from the car - and is another one of those quintessential 'south of France' scenes.

Back in the Studio - finally! 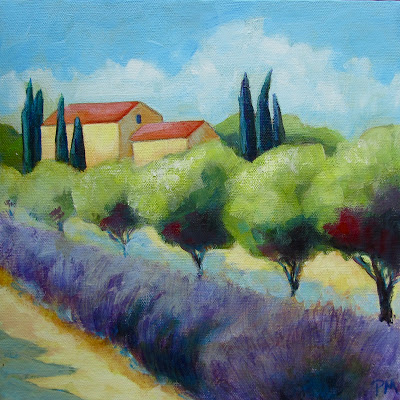 It has been a busy fall and there has not been a lot of time for painting. I finally got down to business this past week and started a large landscape, which I am ruminating on - and did some smaller works too. This is the first of the latter - a quintessential provencal scene with a garden row of lavender, olive trees and red-roofed buildings - all bathed in glorious sunlight. I can almost hear the cicadas!

We have been in Budapest for several days now - walking and enjoying this beautiful city on the Danube. I have been squeezing in some drawing time whenever I can - some are done on the spot, and some have been done from photos. Colour was added later. You can probably tell which is which based on the style. Tomorrow we head back to Berlin and then home. 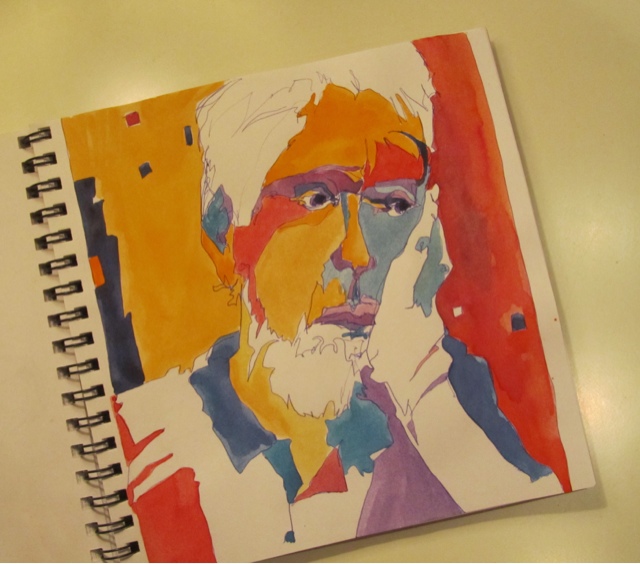 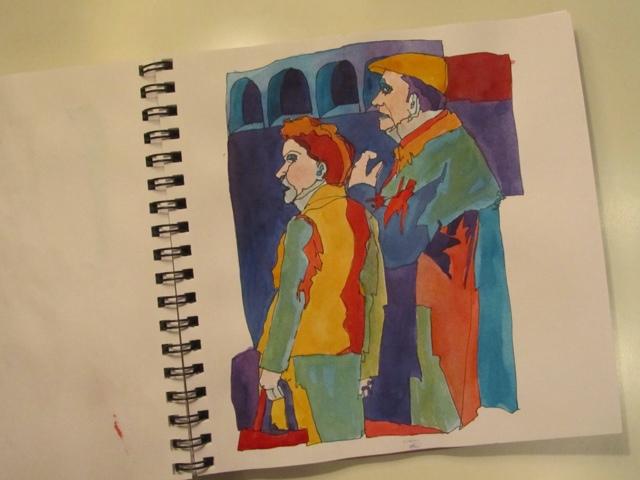 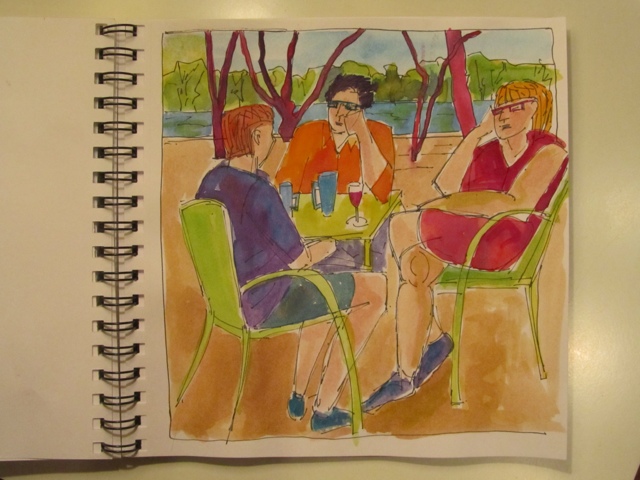 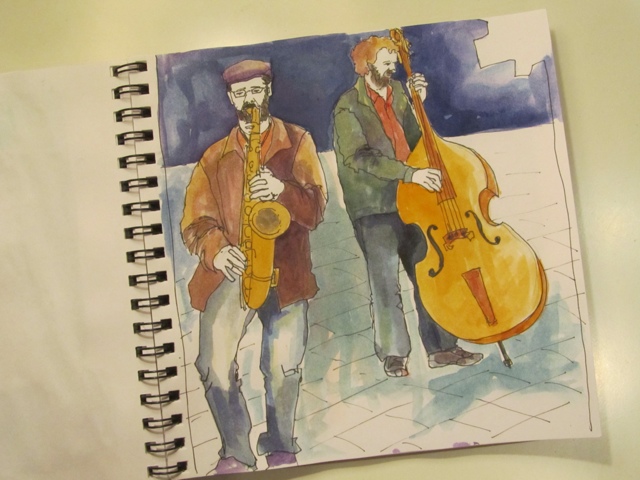