A New Painting and Spotlight Interview with Daily Paintworks

I spent a morning and an afternoon painting in an old abandoned ochre quarry near Les Bassacs (Provence) in May, and I knew that many of the photos I took would provide me with additional paintings ideas. One photo was of a pathway leading away from the ochre area, and that inspired this painting.

I hope that you are having a wonderful Friday afternoon wherever you are and looking forward to a 'long' weekend, at least in Canada (Monday is our Civic holiday). If you are looking for something to read or are just really really really bored, click this link and you can read my interview with Daily Paintworks, an online gallery where I have been posting my art for a few years now. Cheers! 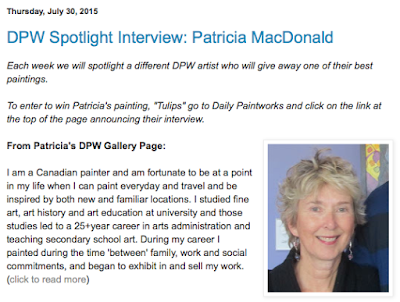 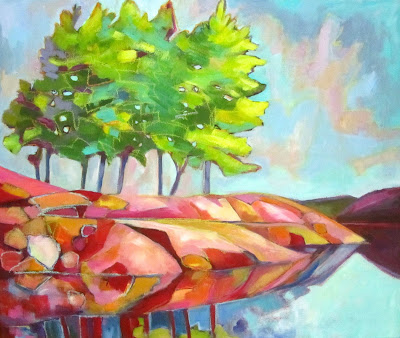 This tiny rocky island lies off a big island on Redstone Lake (in Ontario) where I am fortunate to spend time each summer in a small rustic cottage. Over the years I have taken many photos of this little island while we have paddled around the big one, and they have been starting points for several paintings.  Each interpretation, however, has been quite different. I really like the saturated palette, and the lightness of those hues reminds me of summer air and light. Lately I have been quite interested in pushing my landscape shapes and forms towards greater degrees of simplification and abstraction, and I think it has worked quite well here. Have a wonderful summer day.

Posted by Patricia MacDonald at 10:56 am 1 comments

I love painting pears. They are my default subject when I need to paint or need to just re-boot. That happened when I arrived at my cottage a few weeks ago. 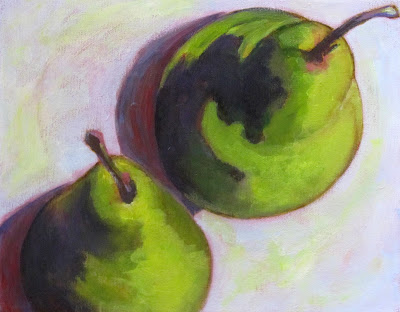 Pear Down
8" x 10"  acrylic on canvas
This one is all about 'point of view' and composition: painting the pears
from above, looking down, and positioning them so that they are barely
contained within the frame. 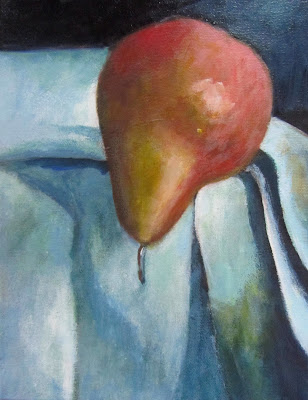 Edgy Pear
9" x7"  acrylic on canvas
Edgy as in 'on the edge' of falling off the table and cloth. Cezanne painted the most beautiful fruit on planes that tilted and did not always make   sense, except to him. This one started out as a grisaille, which is basically a painting done in grey values first and then coloured with layers of transparent glazes. However I did have to add some white to some of the colours to achieve what I wanted. A few of the stages are below. Cheers!
These are for sale - contact me for prices if interested. 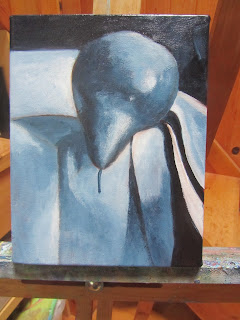 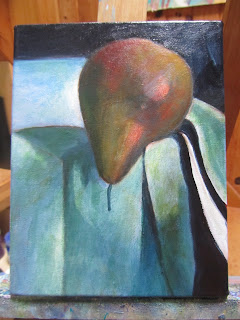 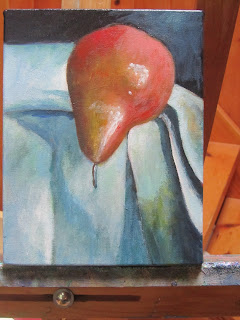 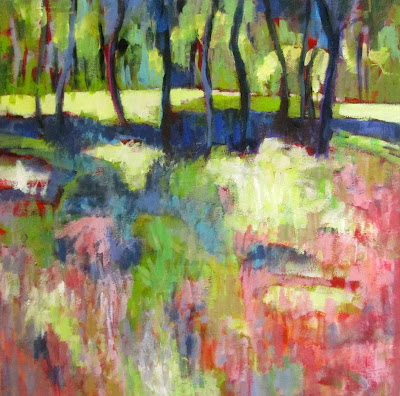 This painting was inspired  by my recent experience plein air landscape painting experience in the south of France, and is based on a photo I took after painting at this spot one morning. My photo does not do the setting justice, but I hope that my colourful palette does! 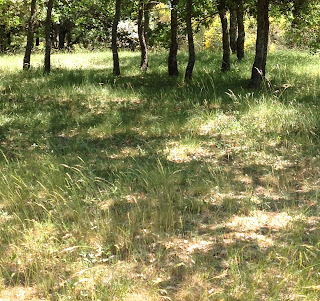 Posted by Patricia MacDonald at 10:30 am 1 comments 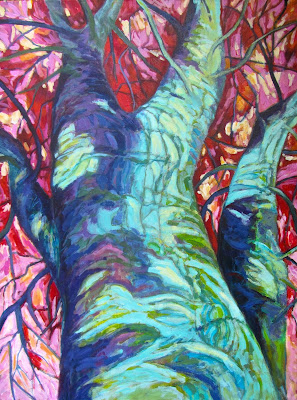 Inventing Nature, One Tree at a Time
24" x 18"  acrylic on canvas
For sale - contact me for price if interested.

I am presently at my cottage, on an island in the woods, in northern Ontario, surrounded by trees and trees and more trees.  It's wonderfully green and peaceful. Upon returning to this place I found a painting that I started either last summer or the previous one, but had found difficult to resolve at the time. 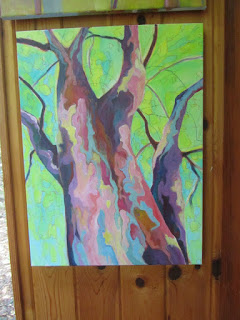 The inspiration for it had been the plane or platane tree, and it's camouflage-like patterning of the bark - which became a feature in two paintings I did in 2013, which I felt were very successful and I was pleased with. 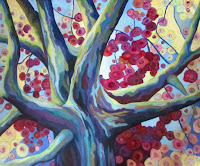 I think it was the bark however that had stalled me in this third, vertical canvas. Several days ago I began to really look at the trees around me for some further inspiration, and decided to paint out the camouflage patterning, drew into the body of the tree, and then just kept going with lines and colour, re-inventing nature.
I am really pleased that I did not abandon this one, and finally found a creative solution, and I really like the result.

Posted by Patricia MacDonald at 10:49 am 4 comments