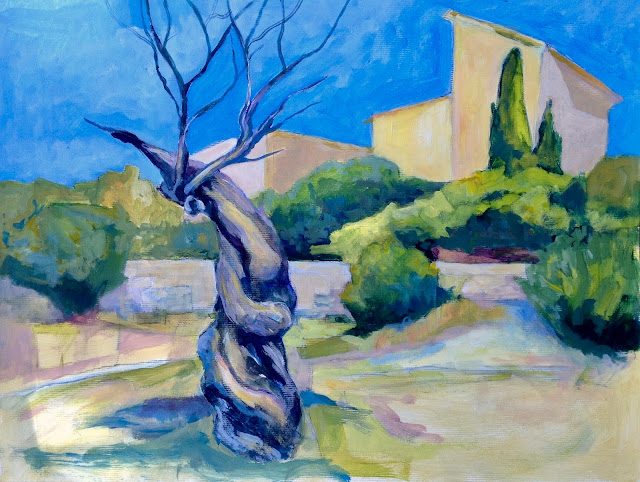 Near the end of our second and last week of painting in Provence, in September, we spent the day in Viens.....

one of those gorgeous villages in the dramatic, wild landscape east of Apt that happily
the guidebooks don't bother with. Perched on a rocky crag for the last 1000 years,
Viens gives three distinct impressions depending on which route you approach it on:
a fortress from the north, citadel from the west and a typical perched Provence village from the south (from The Luberon.com).

As it was a beautiful sunny day it was necessary to find some shade to set up and paint in as well as find the perfect view. After a cafe and a walk through the village we found this scene (it looked better in life!) but in order to get the best view of it and the ancient almond tree (an amandier) in the centre, we had to climb the 4 foot stone wall, which we did and then realized we were on private property. We debated for awhile whether we should really do this but eventually decided to go ahead - and it proved to be a lovely spot. 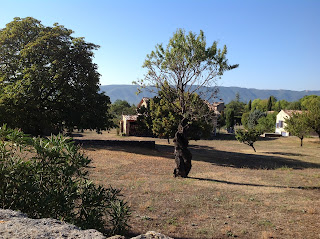 You will note however that this is not the same view as the painting above. As it became too sunny  where I first set up I had to move to an area where it would remain shady into the afternoon and I ended up with another view of the amandier which I was quite happy with. I was very happy with the finale painting - the simplification of form, with some abstraction, local colour palette, and a good rendition of the gnarly tree itself. 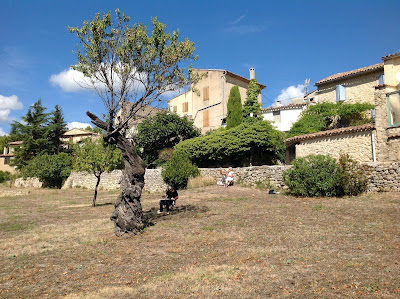 Posted by Patricia MacDonald at 7:00 am