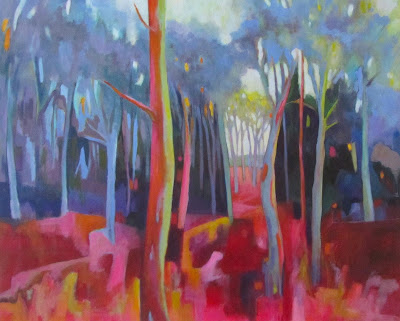 I started the work shown here, back in November, and it changed a lot over time. The subject was inspired by this photo I took while walking through a conservation area near to where I live in S-W Ontario. 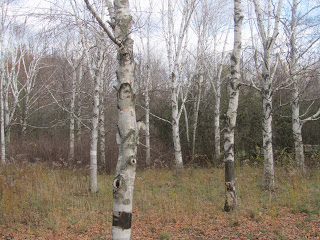 Even though it was quite a dull day and there was little colour in the landscape, I liked the arrangement of trees across the picture plane contrasting with the three horizontal bands of fore, middle and background.
In stage one I established the colour palette and the division of space - and really liked the Wolf-Kahn-esque appearance and considered stopping........but decided to proceed with my original idea, for better or worse. With each successive stage the tree forms took shape, and the grounds became more distinct and detailed.

I wasn't crazy with it at this point and decided to define some abstract areas with an acrylic marker, and then obliterated the lines with more paint......
By stage 4 I realized that the composition needed a more distinct focal point - something that would break up the horizontality of the composition. I also wanted to create a better visual path through the compositional space, and that became the actual path too once I opened up a 'space' through the trees which you can see in the finished work at the top of the post.  I am quite happy with the finished painting and love the whimsical, magical feeling of the scene - hence the title. Cheers!

Posted by Patricia MacDonald at 10:36 pm