Variations on a Theme: the Church at Joucas

In a recent post I talked about painting this scene in the Provencale village of Joucas. I really love the way the church appears 'up' and at the end of the narrow street, peeking out between buildings on either side, and the 'path' that leads up to the church door but is not a path but really sort of a ditch for the rain water to drain down hill. 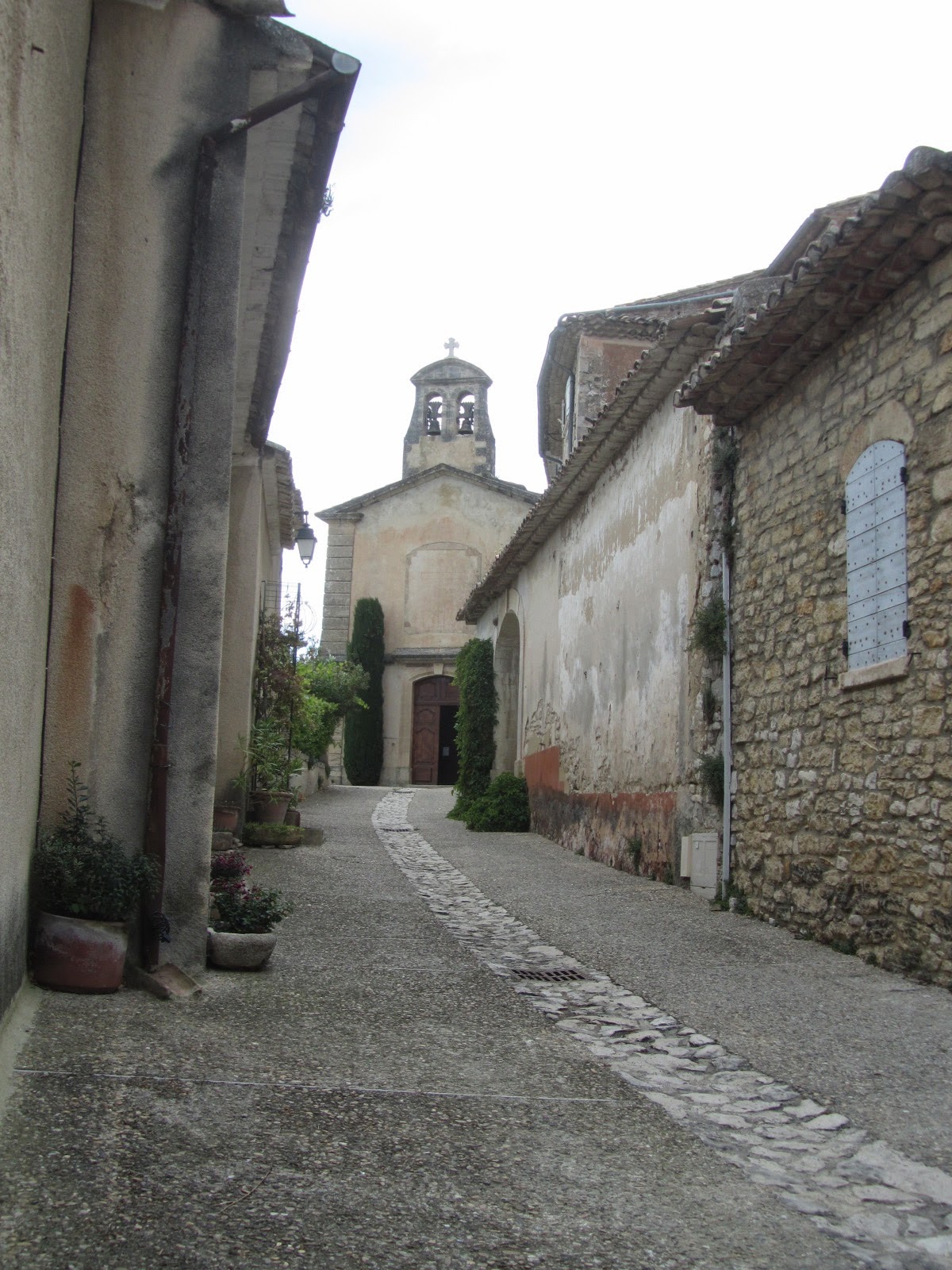 Last week I re-visited this image, and painted three more versions.
Two are really just done with different palettes and the middle one is a little looser and more abstract.
All are acrylic on acrylic paper, and approximately 24" x 18", and available ($95 each).
. 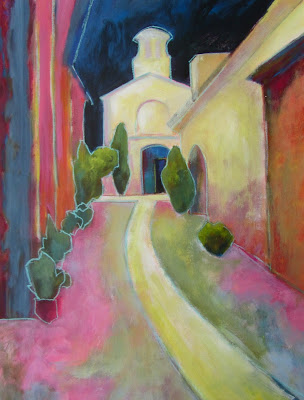 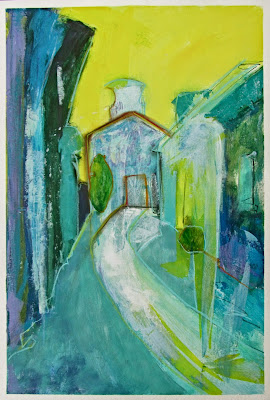 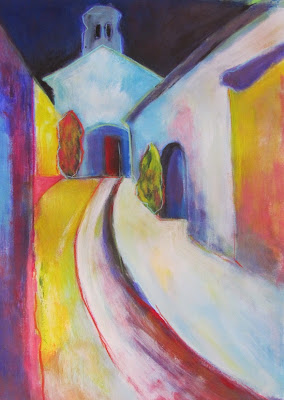 Poppy Field - Variations on a Theme

Poppies, called “coquelicots” in French, bloom in Provence, in May. They seem to grow everywhere - singly and in small clumps along the roads, and in masses, appearing as great swaths of red in near and distant fields. In an earlier post I mentioned a wonderful view of such a poppy field on the grounds of the Chateau de Bourgane, where we spent an afternoon painting.
This image became one that I returned to during my week, when not plein air painting elsewhere. My work in the studio started with a traditional monochromatic painting based on an earlier drawing.
Then it became the basis for experimentation and abstraction, simplifying shapes, adding surface detail and pattern, playing with perspective and expressive colour.


I found working this way - with one basic image/theme, very satisfying creatively. Each one led to the next in a logical way. If I had not run out of time in that physical and mental space - I wonder how many paintings I would have done. Perhaps I will look for another view or image this summer and see what happens.


Posted by Patricia MacDonald at 7:00 am 0 comments

Email ThisBlogThis!Share to TwitterShare to FacebookShare to Pinterest
Links to this post
Labels: painting in Provence, poppy field paintings

The village of Goult has a cemetary with amazing topiary trees - and that is where I spent another morning painting at the end of May. 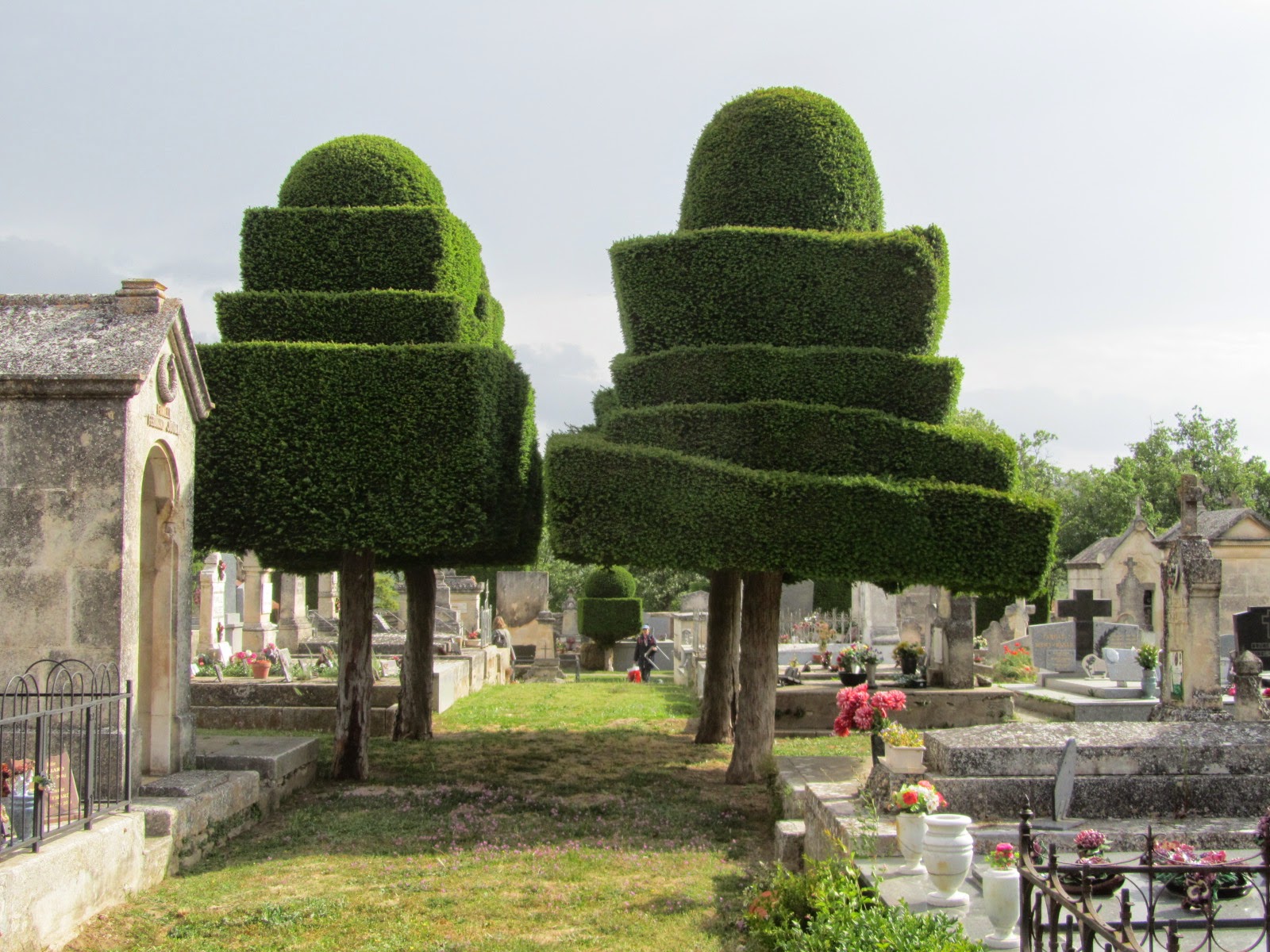 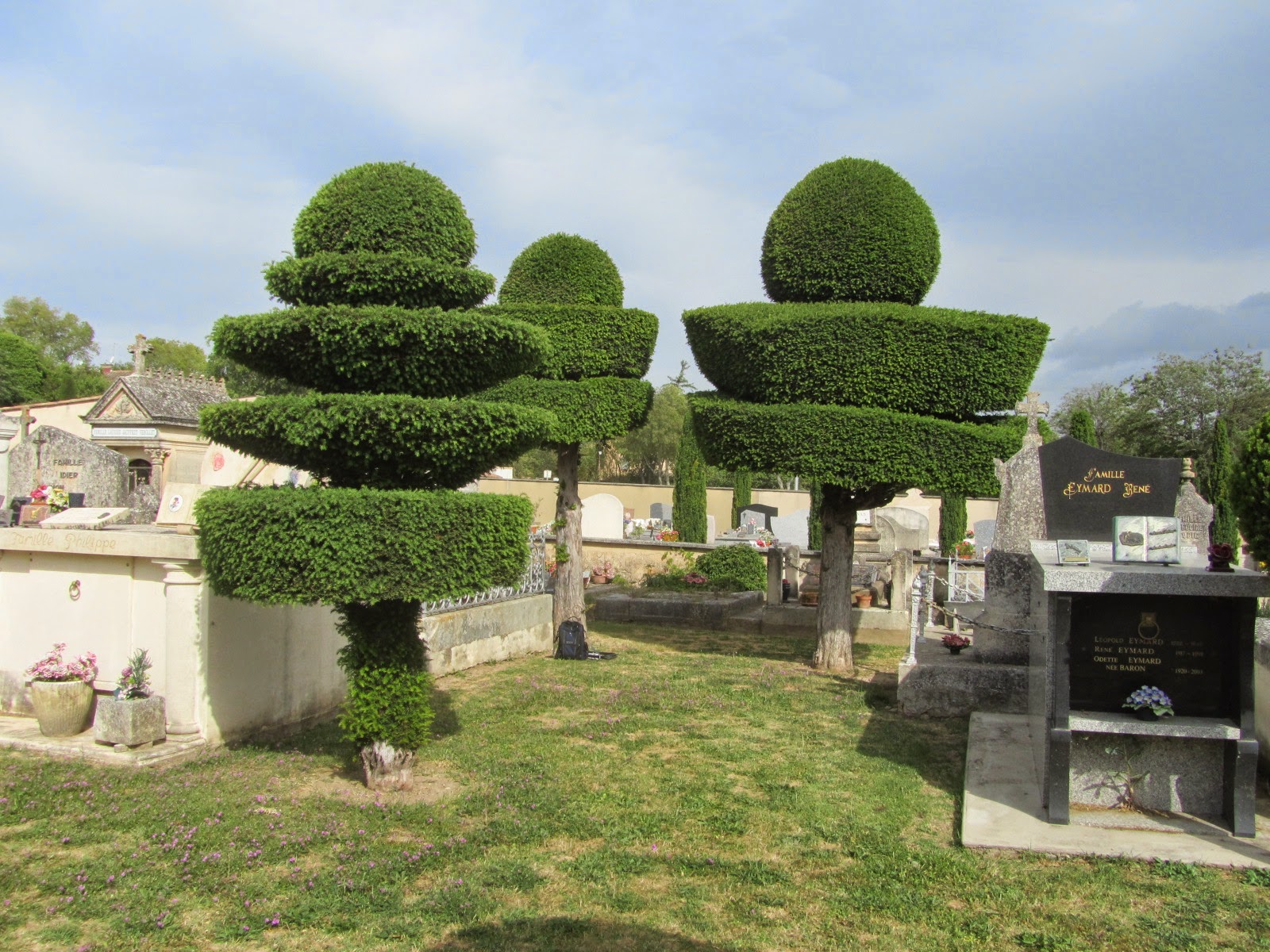 Here are my colourful, somewhat surreal impressions of these delightful trees. 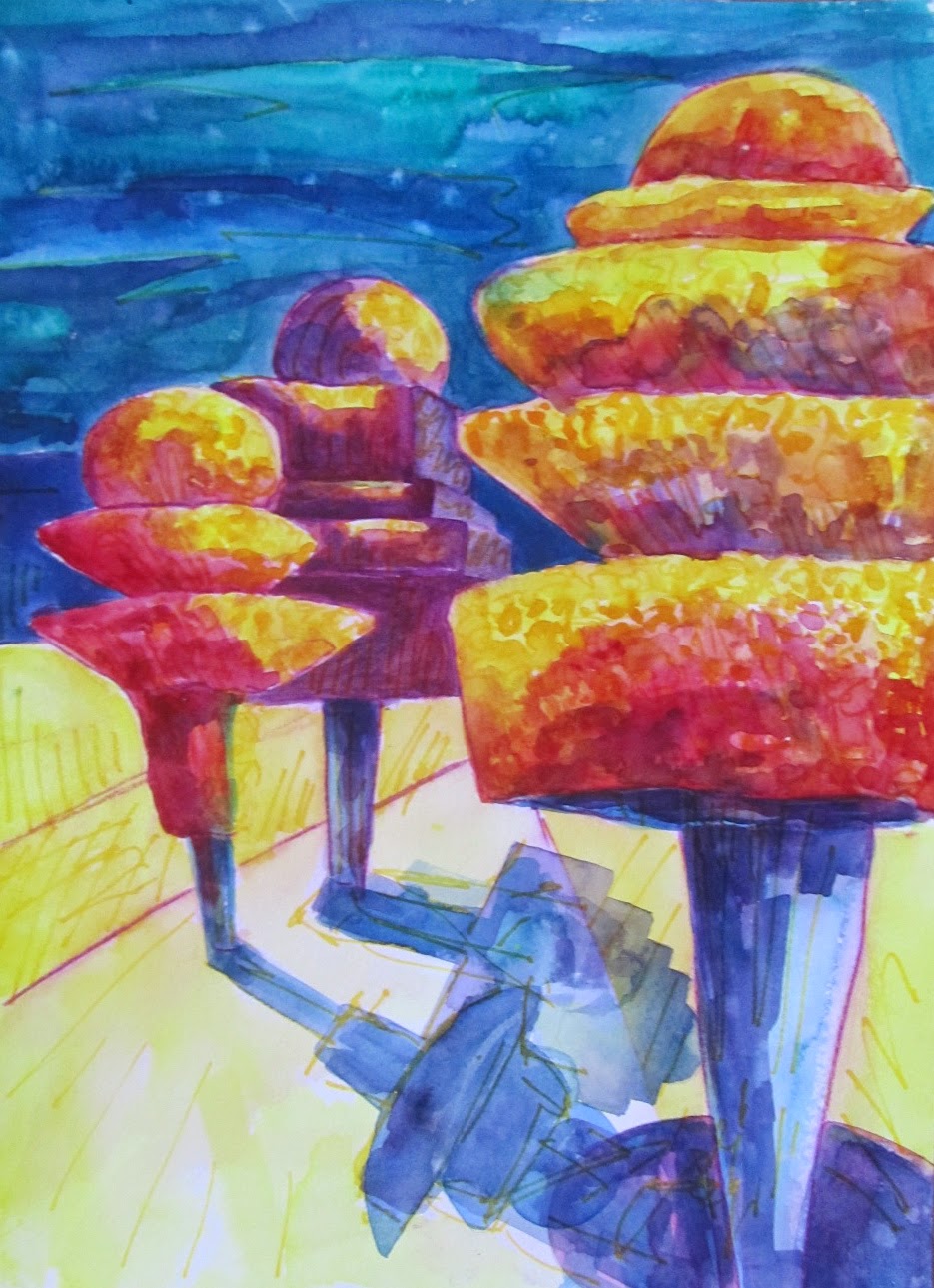 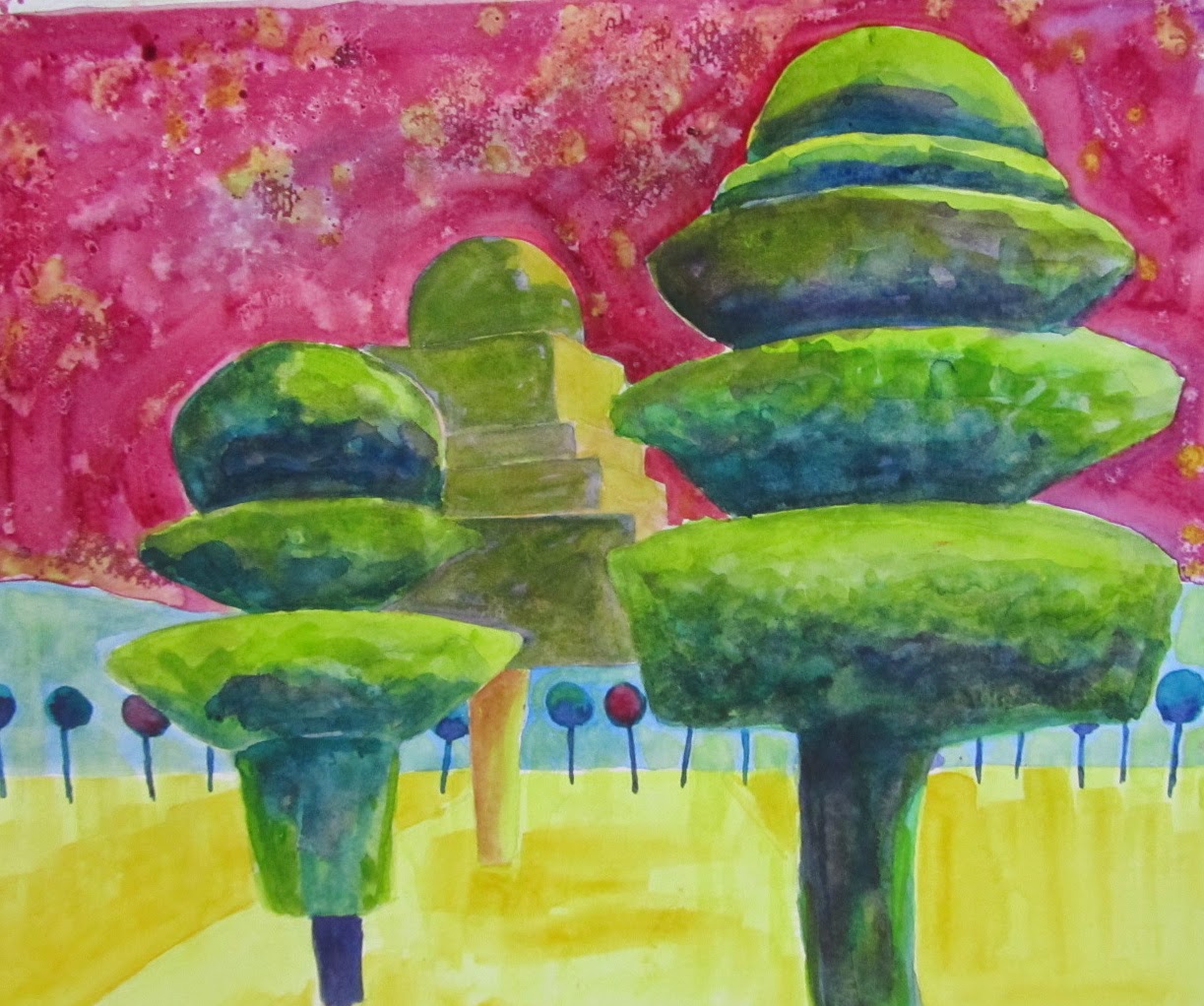 Posted by Patricia MacDonald at 7:17 am 0 comments

Another day, another French village, another painting.......what could be better?
This time the village was Villars - one that I had not been to before - but it was quite similar to all the others - with winding, narrow streets, old buildings, and great views across the valley. After a quick walk around I settled down to paint this view...... 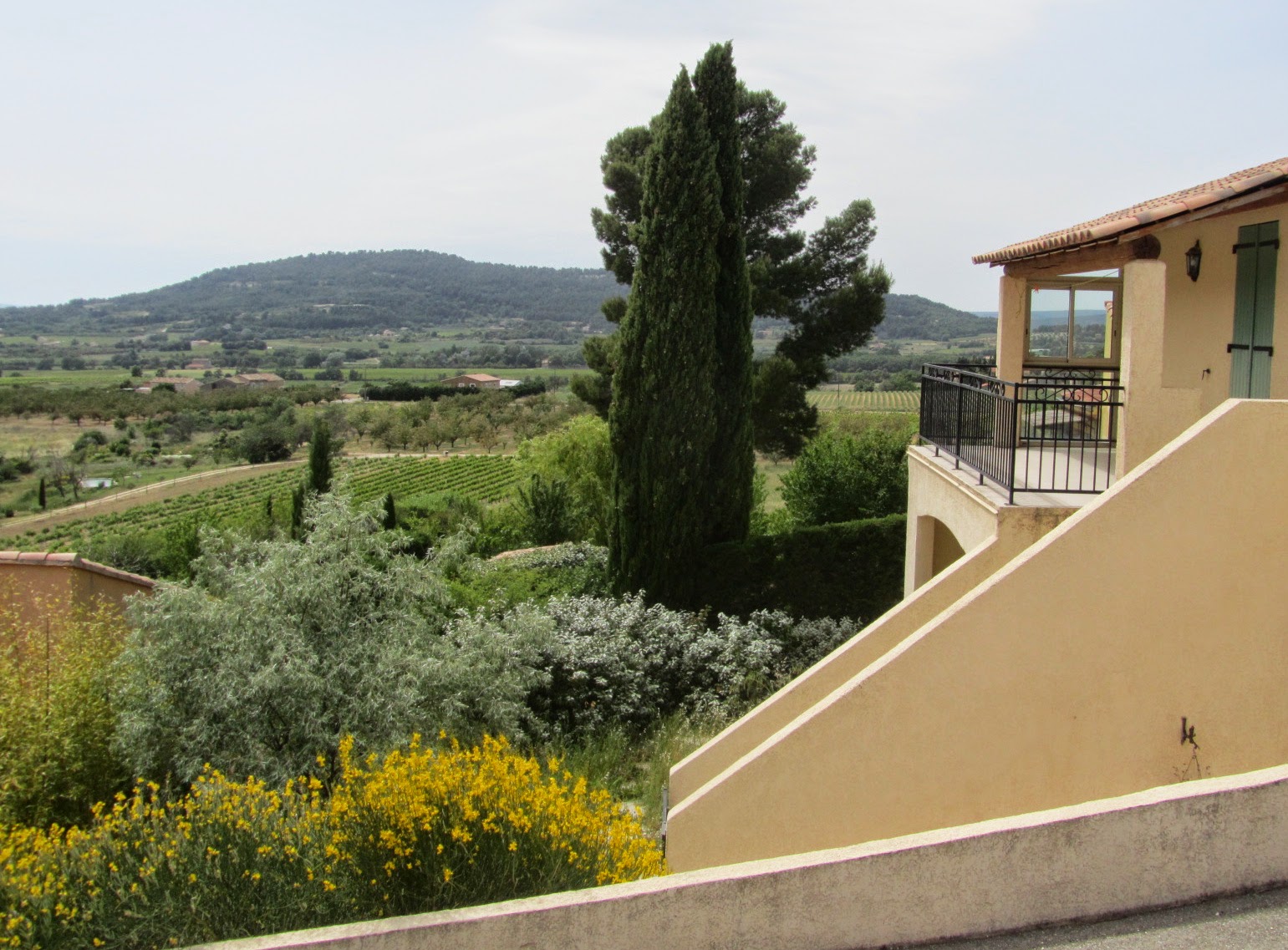 and did this.....drawing the landscape elements with a (yes, red) prismacolour marker, and then adding watercolour. At this point I was regretting the use of the red marker, and I was running out of time. 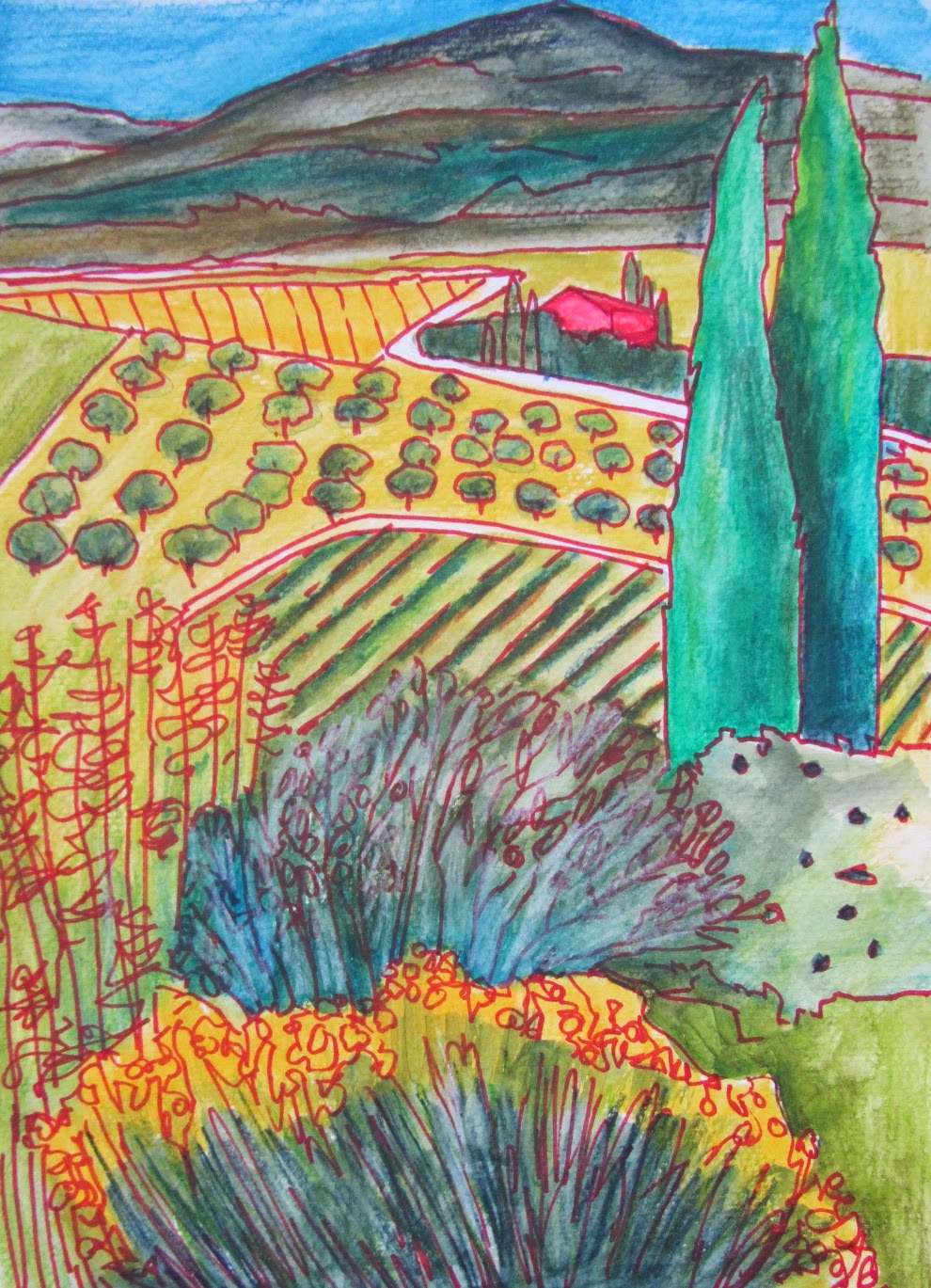 Back in the studio I began to add gouache, covering the red lines, and toning down the palette. 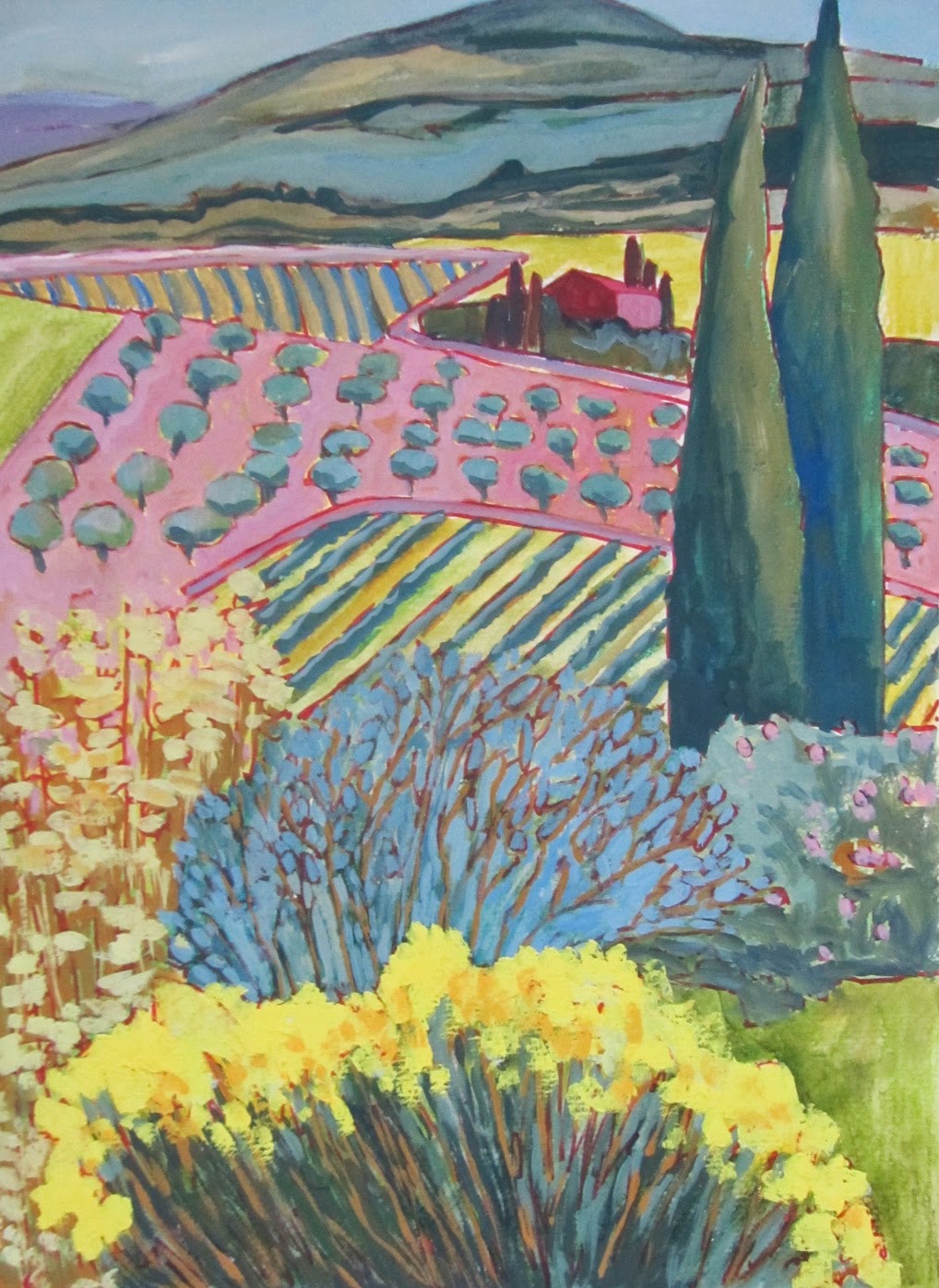 Posted by Patricia MacDonald at 7:06 am 0 comments

Saignan is a village perched at the top of a hill behind a large rock which dominates the Luberon valley - and was another location where we spent the morning painting. Two years ago when there, I spent most of that time wandering up and down the narrow streets, looking for the perfect view (and spot in which to sit to paint it), and ended up just taking a lot of photos - for later use. When home I did paint this - and guess what - the blue car is still there. 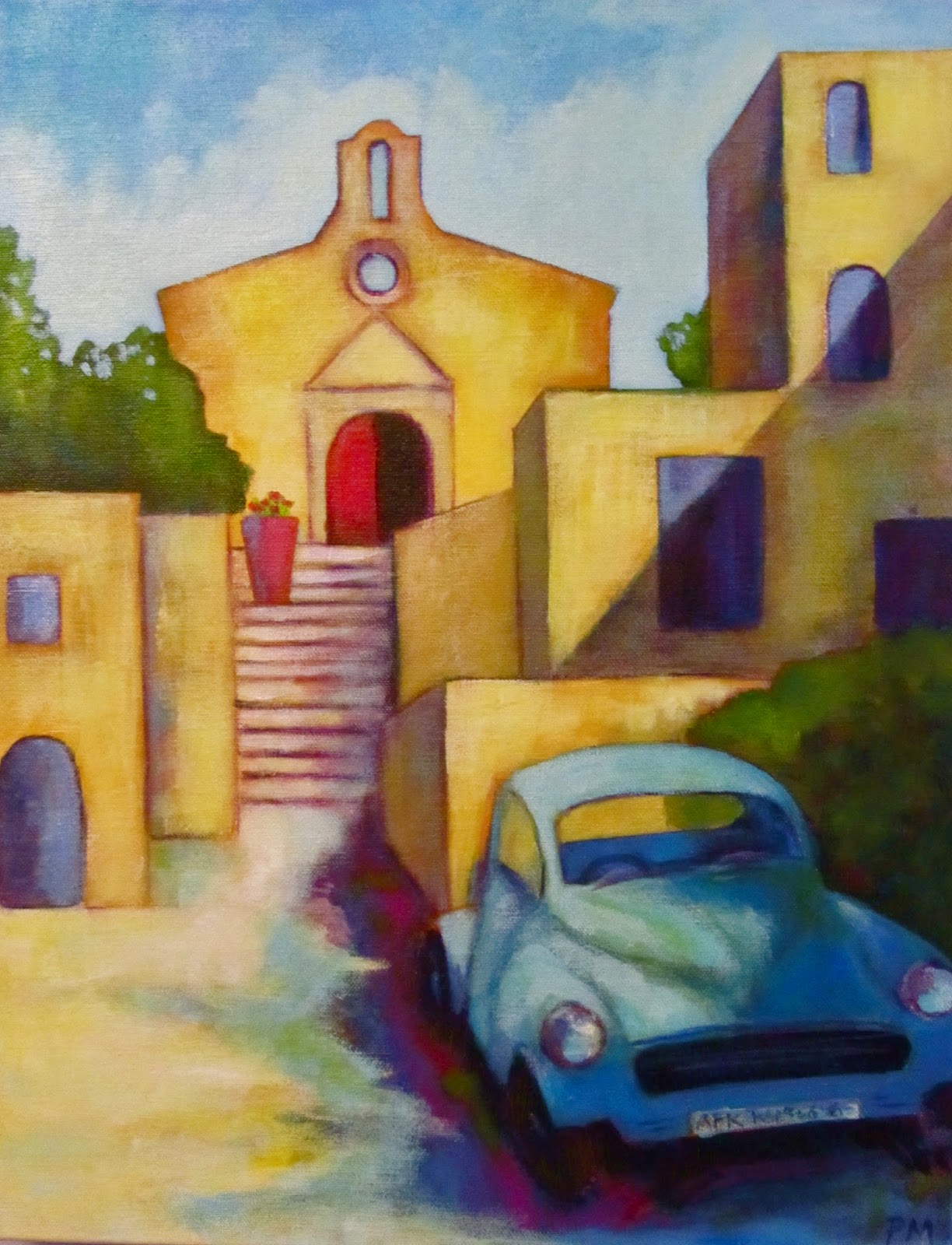 On this trip I discovered a wonderful vista looking across the valley, and quickly settled down (amongst the bees, and errant poppies growing up between the flagstones) to paint...... 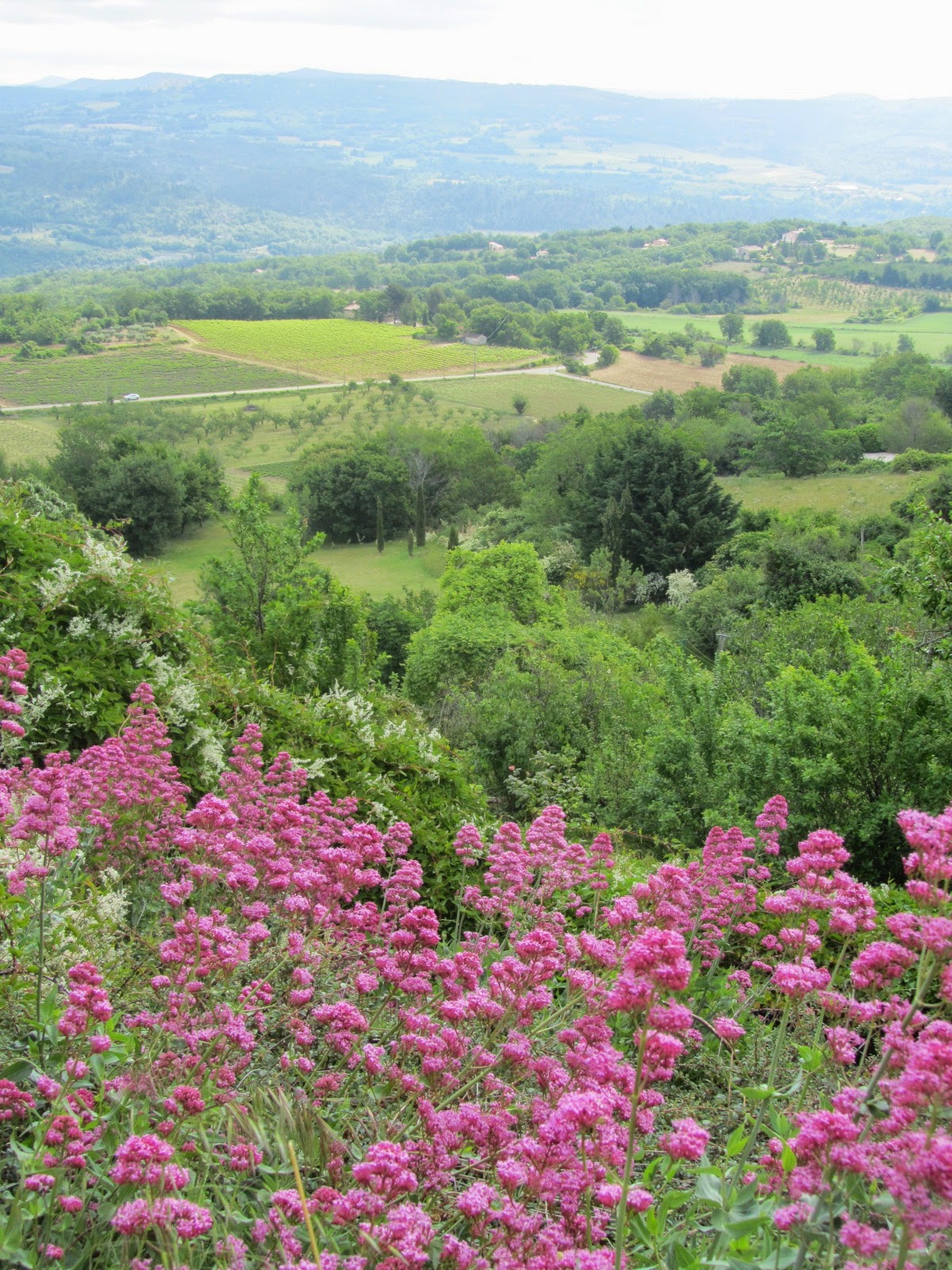 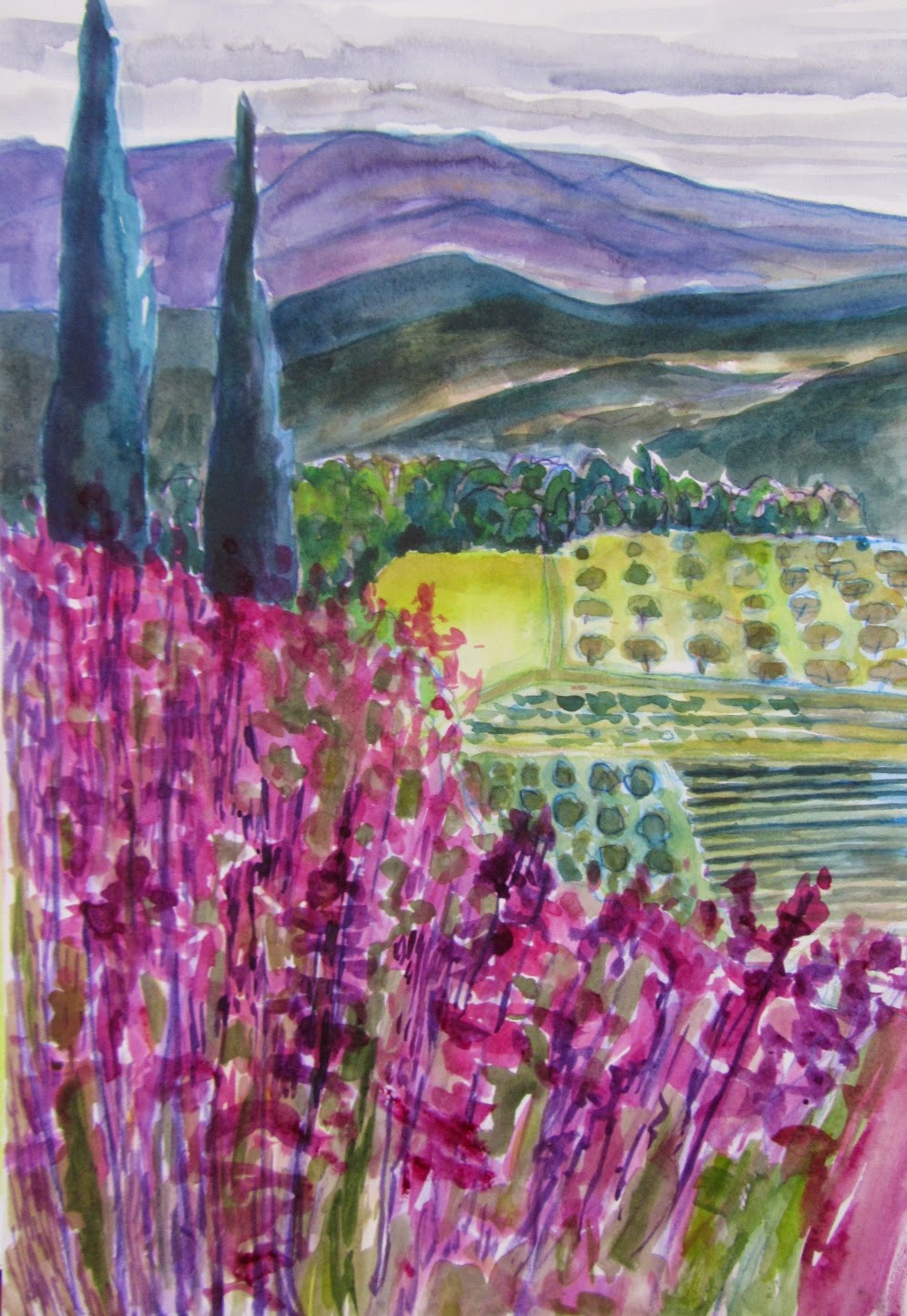 and for fun I also did this.....all in all a great day in Saignan. 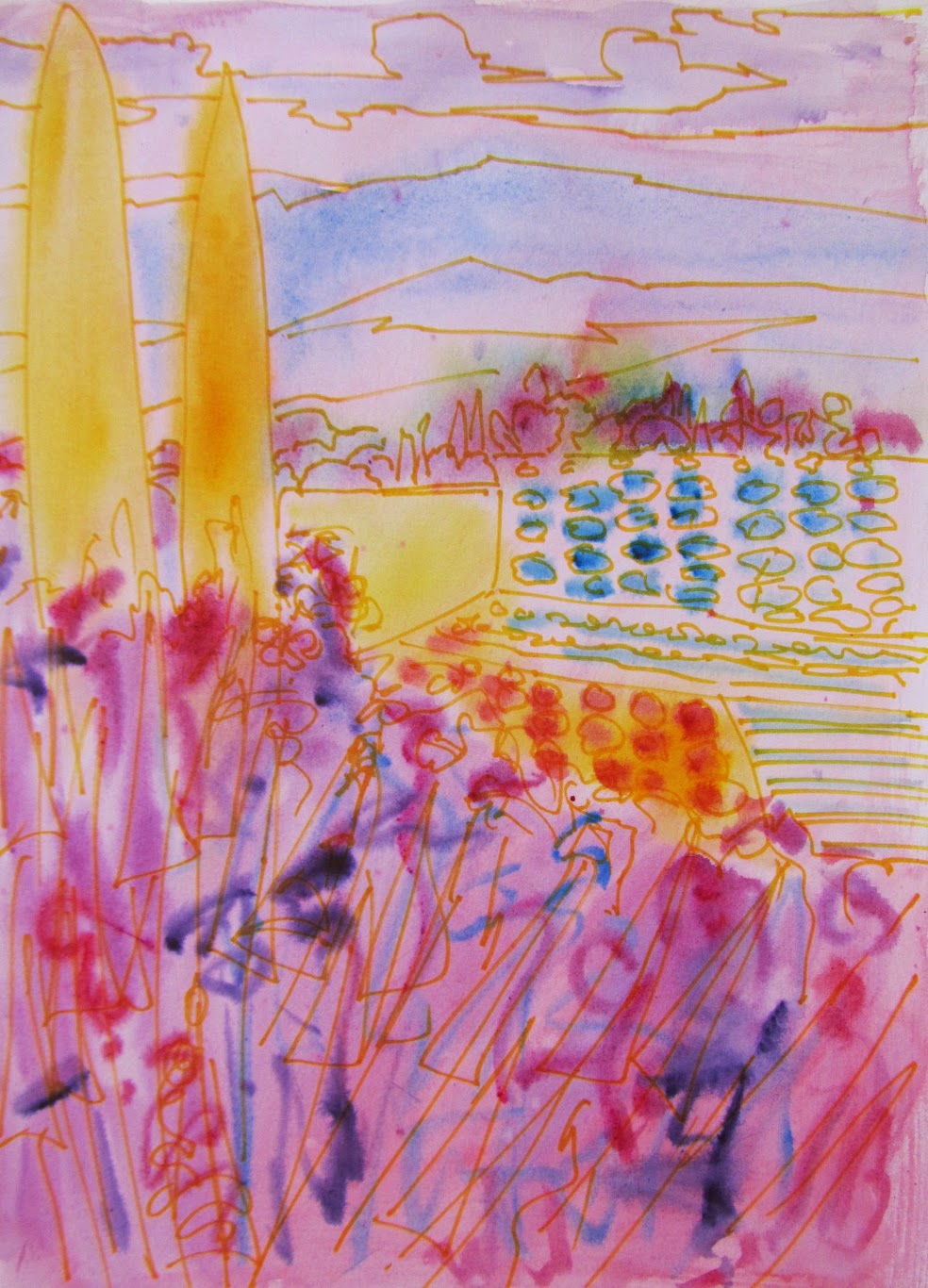 Posted by Patricia MacDonald at 6:41 am 0 comments

Joucas is a pretty little village in the Luberon Vallery (Provence). I painted there two years ago, and did a landscape scene looking up to the village through the vineyard.... 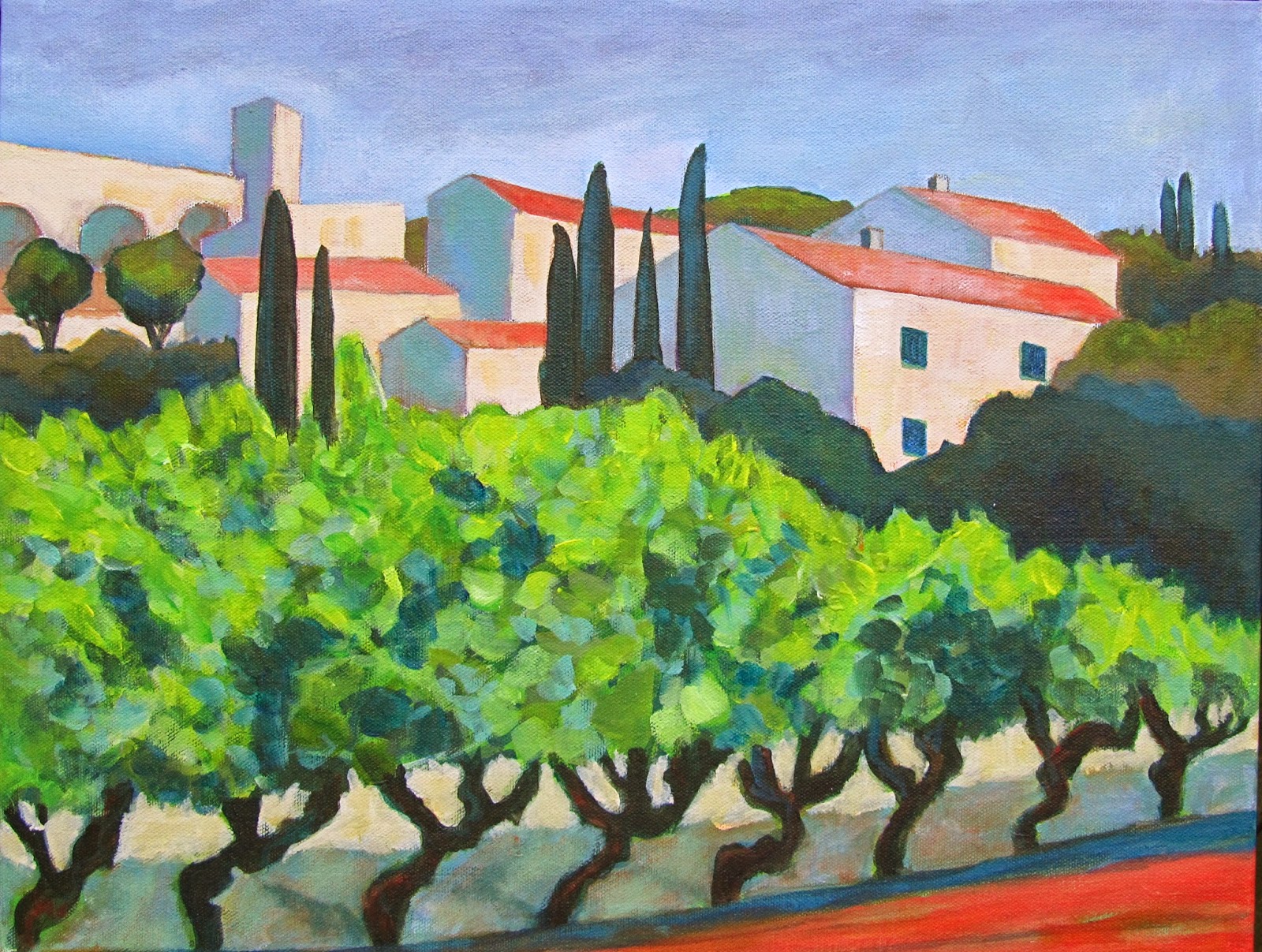 It was fun to return in May, and settle quickly on a painting site..... 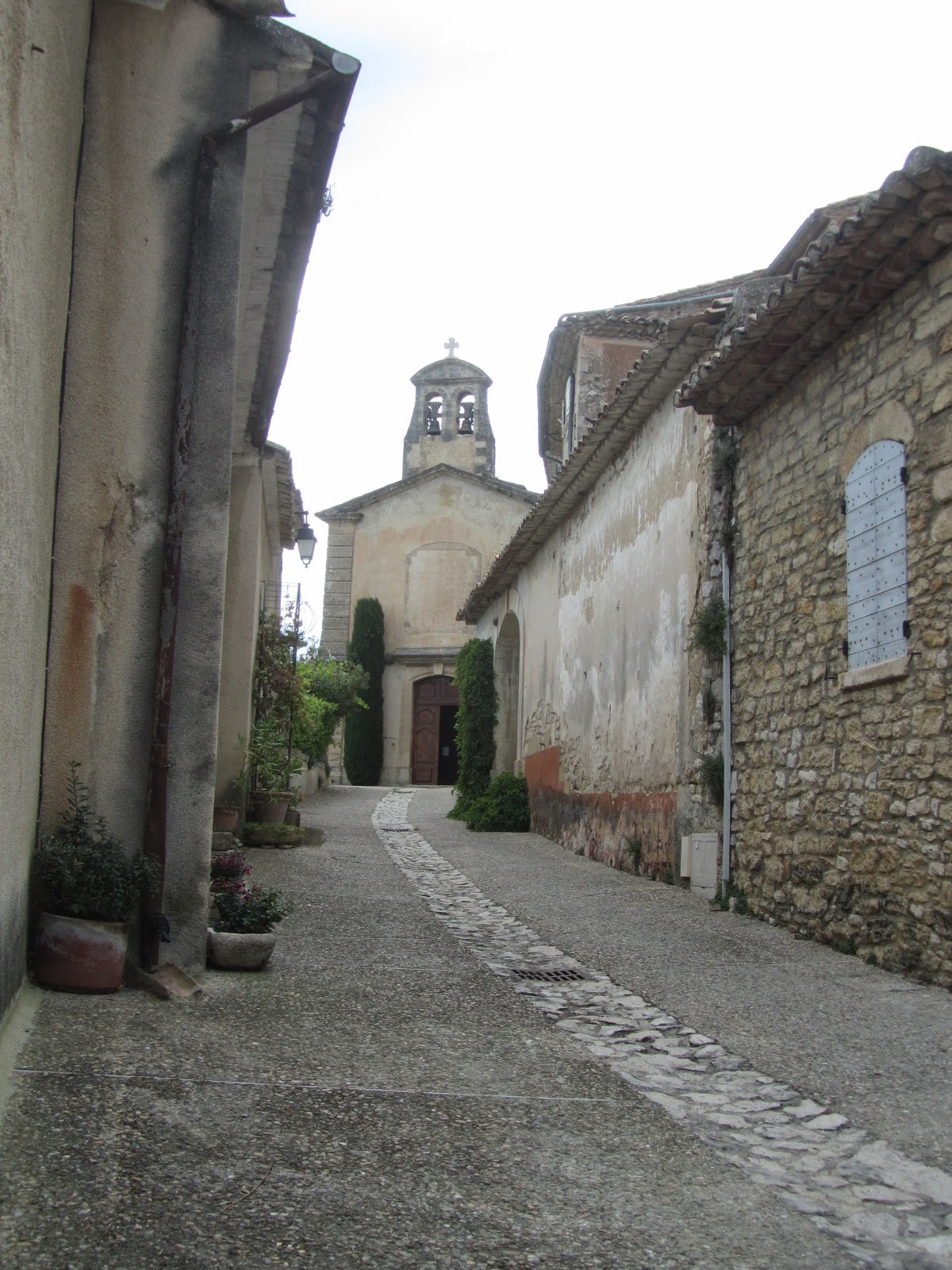 I sat at the left side of this narrow street, that looks up to the local church, with my painting paraphernalia at my feet, and worked on a water colour painting. I really liked the long 'sweep' up towards the church door, and wanted to accentuate that, and of course change the colours that I saw... 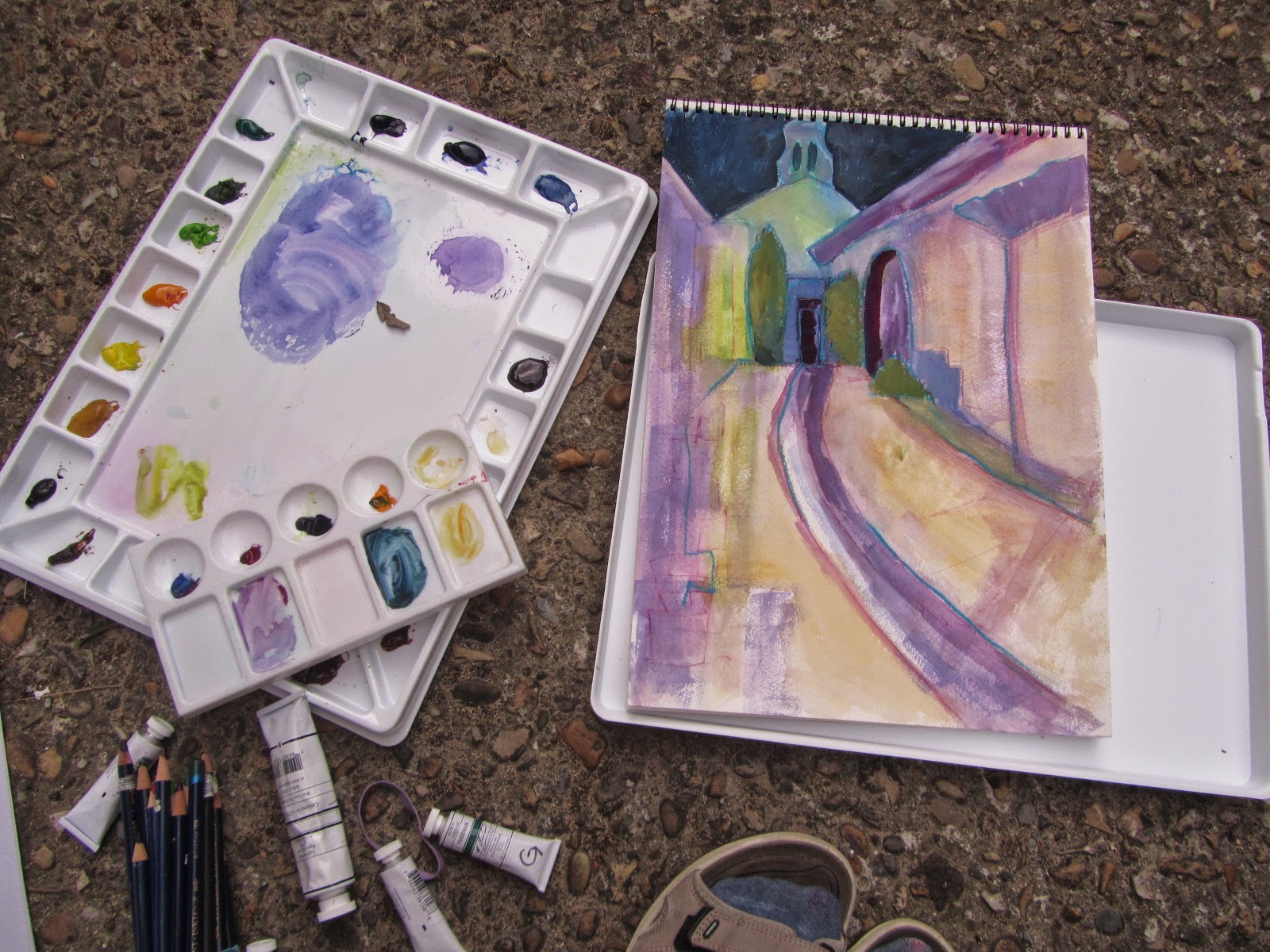 As you can see at some point I decided to darken the sky in the painting, and introduced some gouache and pencil crayon lines into the mix. Now home, I am thinking about a larger acrylic version of this subject. The challenge (well one of many actually) will be to capture the spontaneity of the water colour medium but using acrylics on canvas. That will mean working with more fluid paint, and stopping earlier than I often do.  I will add this to the 'paintings to work on' list, as I give it more thought. 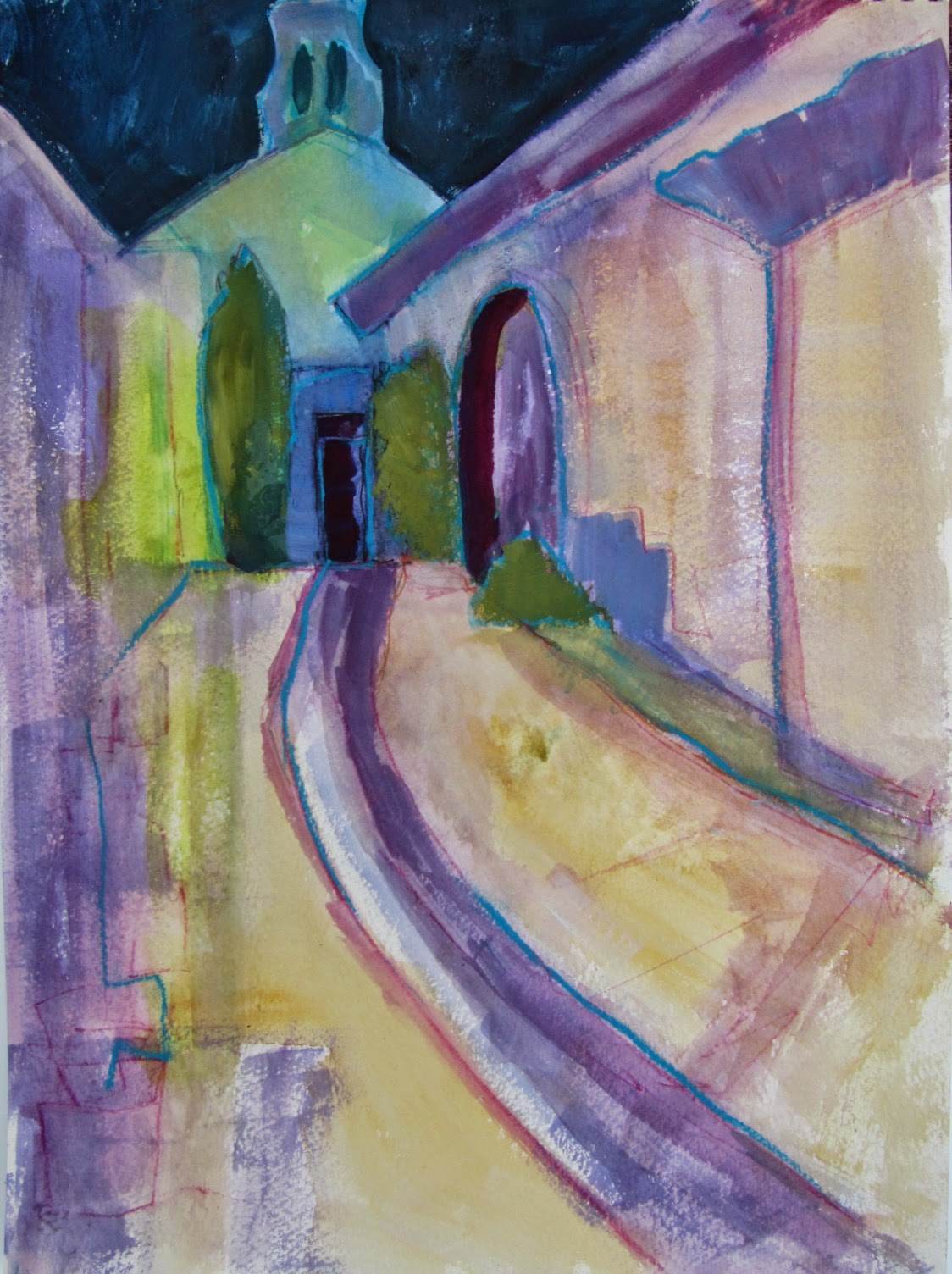 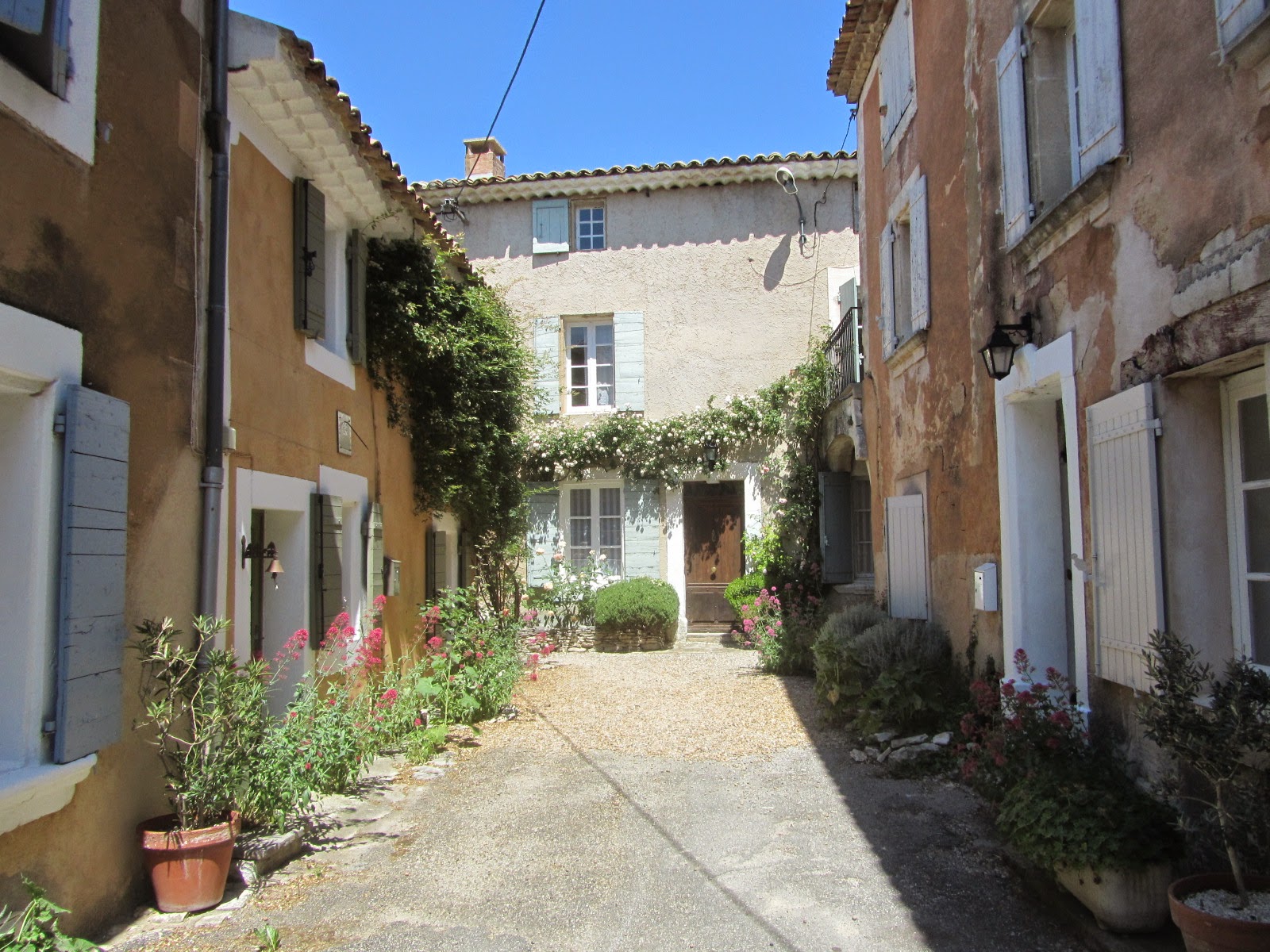 I have recently returned from France, painting in Provence, and have to say that I had a fabulous time. No big surprise! I had hoped to post what I was doing while there, but unfortunately I encountered technical difficulties uploading pictures. So that allowed me some time to reflect on the experience and painting there, and that is what I can now share.
This was my second time to Les Bassacs taking a course at Arts in Provence, and so I had a better I idea of what to expect. As primarily a ‘studio painter’ I found plein air painting to be quite challenging two years ago. Returning to some of the same village locations meant that I knew what view I would paint (so didn’t waste time being indecisive and wandering around), and using water colour, gouache, and paper were more manageable than acrylics and canvas. The other difference was the instructor, Terry Thompson and the focus of the course which was  ‘abstracting the landscape’ (something that continually intrigues).  Days divided themselves into painting on location, and then working in the studio, either completing work, or doing a series of studies abstracting our morning imagery through colour. 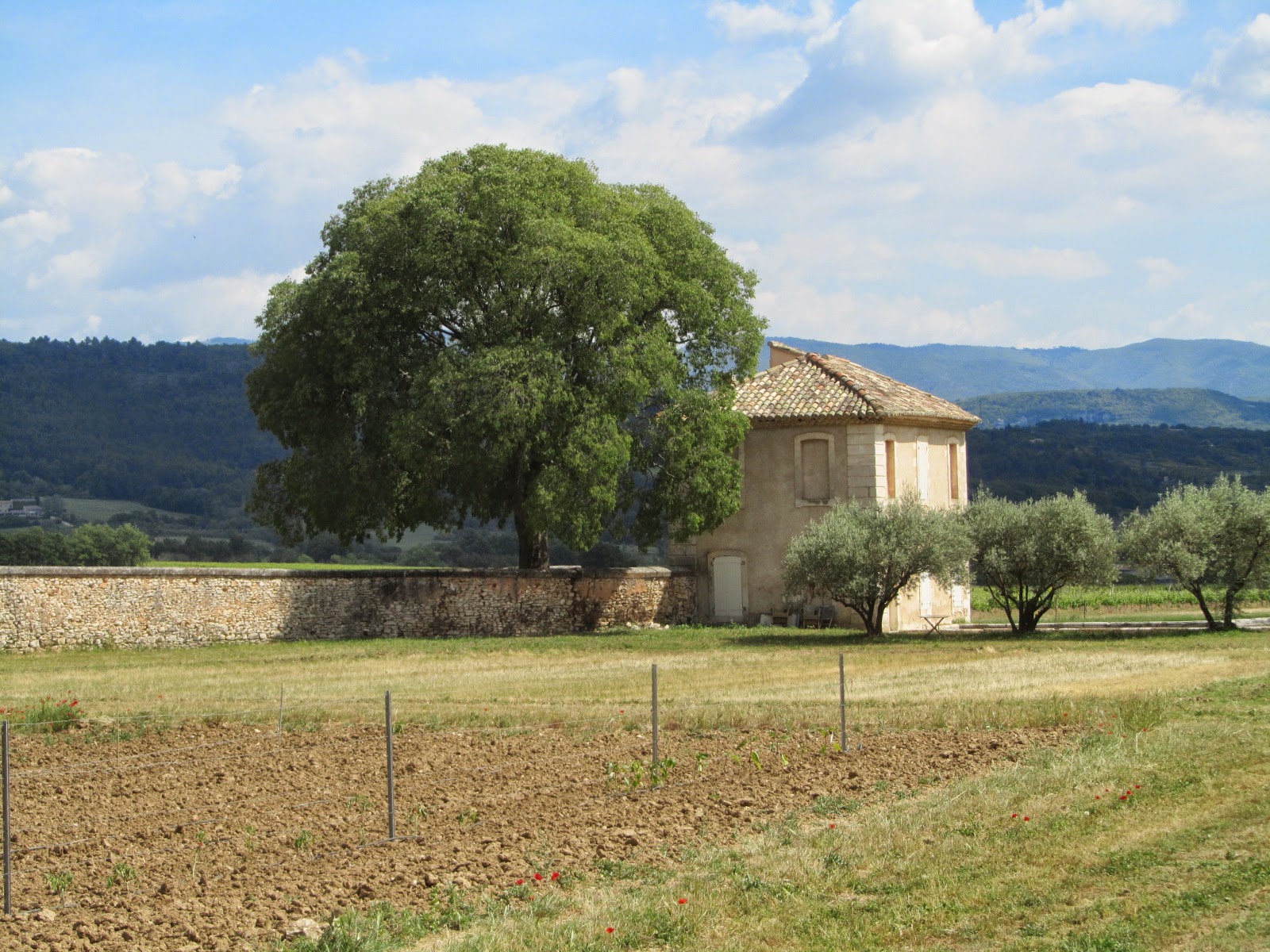 Our first outing was to the grounds of the nearby Chateau de Bourgane, open to the public on Sundays. I was delighted to go there again, and quickly decided to paint a view looking across the grounds towards the hills…..one which I have tried before without any luck. Here is the view I first saw and the painting I started in situ, and worked on later that evening, adding gouache and pastel…… 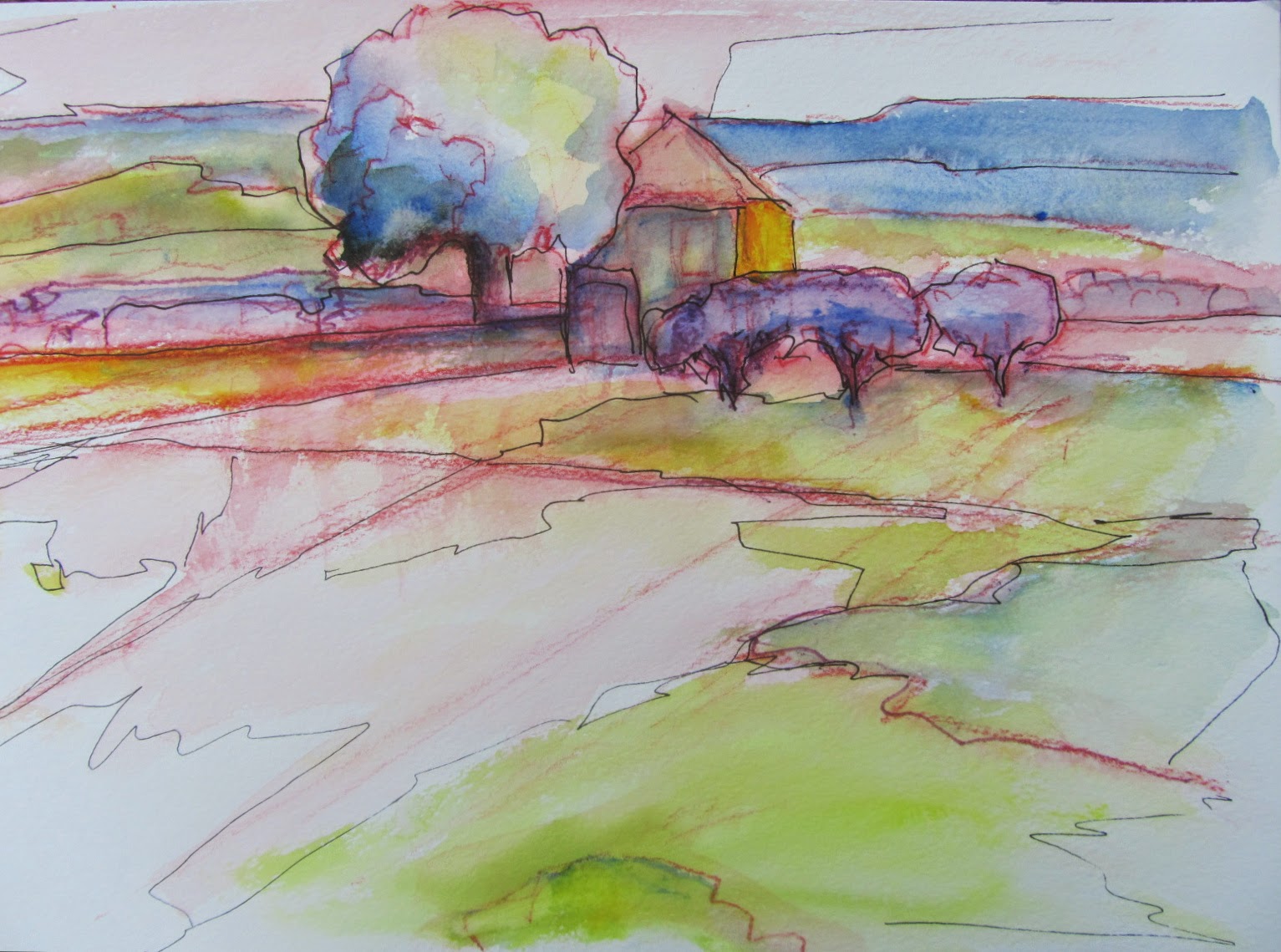 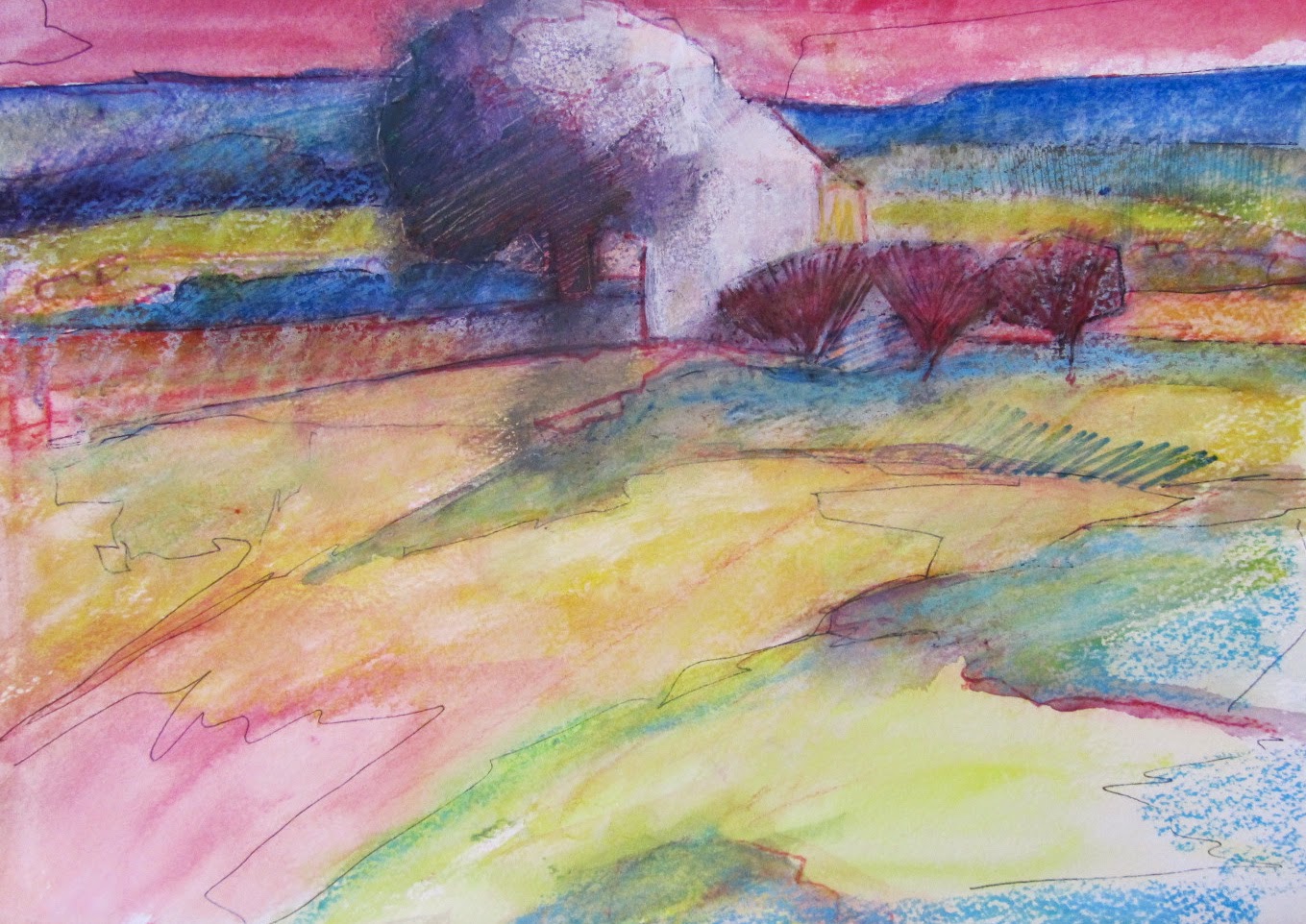 Before leaving the grounds that afternoon I walked further and saw the magnificent field of poppies in front of the house - and this view became the subject of numerous paintings done in the studio later in the week - stay tuned! 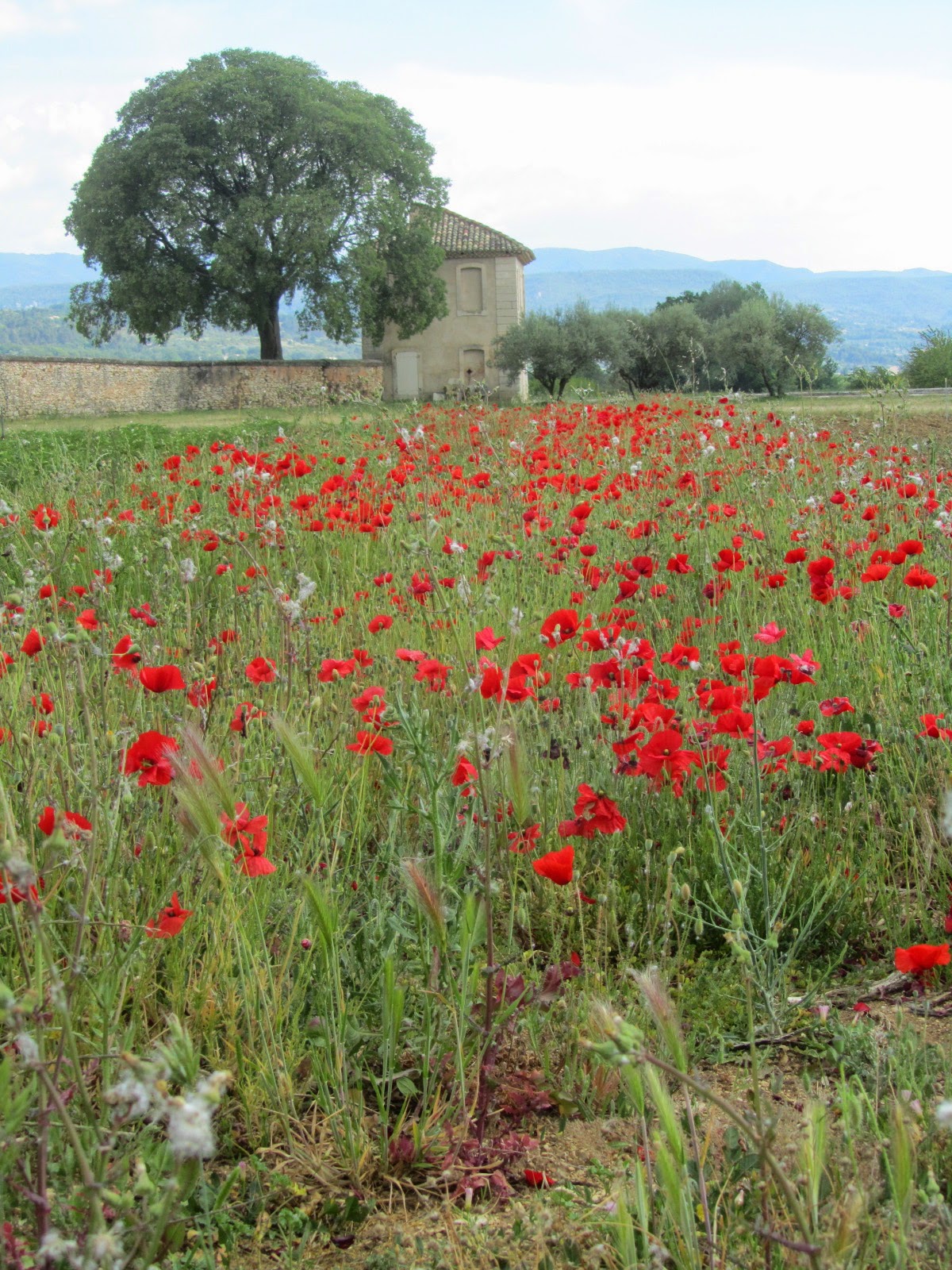